With resolve this time

I fear I've been much less than successful with New Year resolutions for a while now. This is probably due to how well I embrace my own mantra, "MORE is more!" When will I ever learn to simplify? Well, this year is not likely the year, but I am at least cutting myself a bit of slack by only committing to three resolutions this year. That is down at least a dozen from my usual list.

My personal goal is to make it to the temple once a month.
My home/family goal is to do a chore a day (beyond dishes, laundry and tidying) and then forgive myself for the sorry hygienic state my house is in anyway.
My beyond-family goal is to send at least a card (in a timely manner!) for birthdays to all 32 members of our immediate families, at least. Hope nobody's had a birthday so far because I haven't gathered dates yet...

I was sorting through boxes of old journal entries and school papers while at my parents' for Christmas, and I had a sad realization that I used to be both a much better writer and a much more spiritually-minded person (before I had kids). At least those documents would suggest so. I hope it's not true. I wouldn't be surprised if it is, though. Guess there are a couple more resolutions to make there.

In my sorting, I discovered the envelope of letters I'd been writing since high school to my future spouse (I stopped writing them when we got engaged). That was actually a lot of fun to review, although ridiculously mushy. It was surprising to recall how I used to perceive love and marriage. Some things I had spot on, young as I was, like criteria in choosing a spouse. I did a good job there. Other things were just laughable. For instance, in several different letters I fretted over my insecurities about being a sufficient wife and mother because "I don't know how to sew, decorate, cook, make cute crafts," (throw extravagant birthday parties,) etc.

Yeah, I really didn't. But guess what? It didn't take me long to learn, and now I suppose I know how to do a few of those things a bit TOO well. Or at least that they've taken up a bit TOO much of my time. Oh yeah, so another resolution for this year is to stop crafting. Pretty much altogether. No, I guess just to take a hiatus until Charlie sleeps more than two hours at a time during the night. Or someone has a birthday. Whichever comes first.

So, I also wrote that I felt insecure about being marry-able because "I can't get up in the morning, I resist housework like it's the bubonic plague, and I put little effort into my physical appearance." Now that I have the cooking and crafting aspects of homemaking down, it's tough stuff left to tackle.

Mornings might always be the bane of my existence, but I must conquer the urge to relinquish my parental responsibilities to PBS until midday.

I must stop begrudging the reality that the housework constantly piling up around me is mine to do.

I must do something about this postpartum physique that I sometimes still refuse to accept is my own. I've been putting it off, hoping it would take care of itself in due time, but after several comments from Mom about my "round tummy," Ellie flat out questioning Kyle today "Why does Mommy look so fat?," and Bob this evening sincerely asking me if I was pregnant because "you have a bulge there," this issue can no longer be ignored. I see myself in the mirror, but only briefly, because after I look away, I can convince myself that I look much better than my reflection suggests, and it's easy to stay distracted enough to not worry about my appearance.

I consider myself pretty fortunate that this is the first time of my life I've really needed to diet (and exercise, but that's not gonna happen. Well, only if it ends up being easier and more effective than cutting calories). Metabolism has always, more or less, been on my side. At the same time, genetics has not, in that my mother's family is replete with "apples." That's great when you're pregnant anyway, but when you're six months postpartum and still look ready to deliver any day now, apples are just about my least favorite fruit around.

So, I guess you could say regaining a non-pregnant figure is a resolution of mine. Not that I was terribly committed to it until the comments I got tonight. (We did have cream cheese-filled chicken enchiladas topped with cheddar cheese and heavy whipping cream for dinner last night, after all. Yes, my loyalty has always been to my taste buds. To butter, cream, and sugar, I would like to thank you for all you've done for me, but now you have done enough. I hope splenda and skim milk will be adequate substitutes, yet I know they will not.)

I guess I ended up making more than three resolutions. Oh well. I'll do better next year. =)

And in completely unrelated news, I bring you a few (less than) recent photos.

Free admission day at the zoo-- 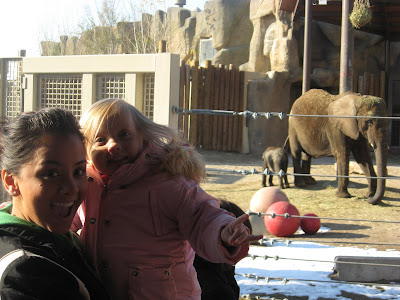 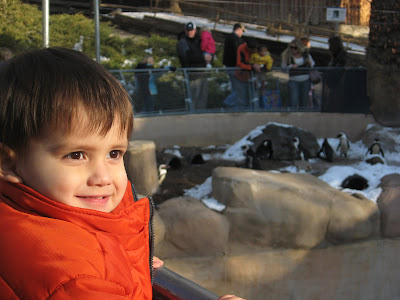 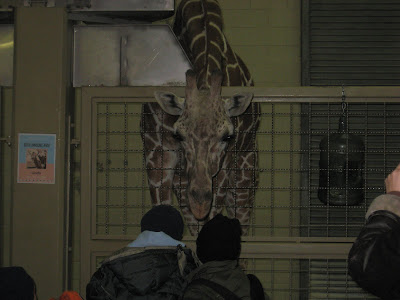 Quilts I made as in-kind payment for a sewing machine, thanks to Emily's generous mom. 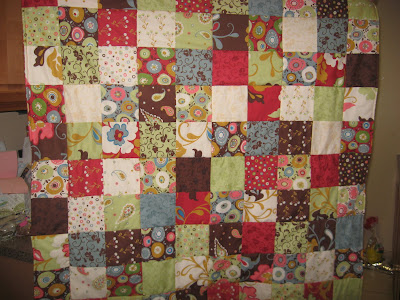 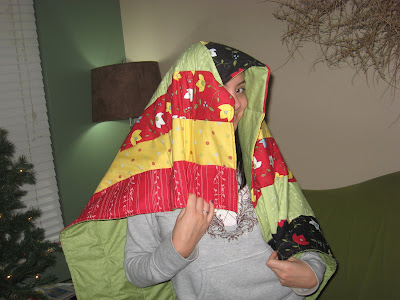 Suhey and I at the 12:09 showing of New Moon, opening day/night. I had just finished the second book (for the first time) and was quite swept up in the movement prior to the film's release. No, I am not ashamed. We had a blast oooing and ahhing with the infatuated audience. I felt young again. Wait, I am still young. I felt childless again. Despite the one sleeping in my arms. 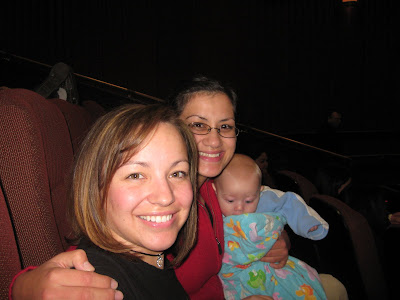 We've found sharp or otherwise dangerous objects to be the best lures for aspiring crawlers. Charlie can now get up on "all fours" and rock back and forth, but shrieking angrily all the way, so who knows when he (or I) will have the patience to see the milestone through. 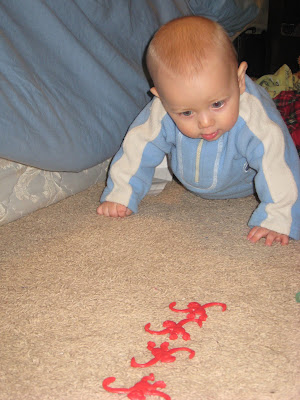 Aunt Mish moved back to Provo, but she doesn't have much food there, so we've managed to lure her back a few times already. So glad she's here. 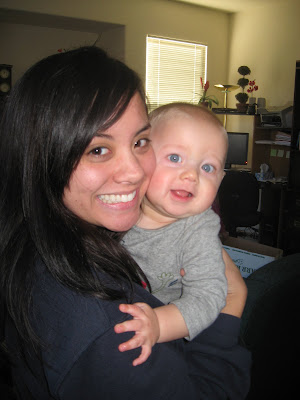 Good thing someone's getting use out of the crib, because Charlie definitely doesn't spend time there. 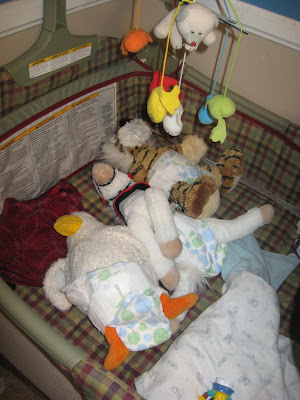 Coming soon-- picture overload in the form of Christmas and Disneyland.

Tiff, you look great. Three kiddos and this is your first diet?! Impressive.

It's funny, one of my resolutions this year is to be MORE crafty! I have a long ways to go in the domesticity department.

Don't feel bad about the PBS thing. Everyone in our family seems to need more sleep than the average bear.

T- I miss you! How was your Christmas in Cali? I'm so sorry that Charlie isn't sleeping well--that is one thing that I'm actually more nervous about than the actual labor and delivery...

You're such a stellar mom. If I can rock the job half as well as you do, I'm sure I'll be translated. (I'm surprised you haven't been yet--just sticking around for my sake I'm sure).

So, three things. One, I also read things that I wrote back in the day and think how I was so much more clever and more spiritual back then. But I don't usually feel too bad about it because how clever can you really be when you get 5 hours of interrupted sleep a night? And what's that whole thing about motherhood being next to godliness or whatever? At least I think I'm more unselfish now than I was pre-babies.
Two, it took probably a good 6 months after Oliver was born for Kimberley to stop asking when the next baby was going to come out because "it still looks like there's a baby in there". And three, that first quilt you made? I LOVE IT. If it wasn't a gift I would be begging/bargaining for it at this very moment. You are the craft queen, I bow to you. I miss you.

Thanks, C. It's not that I couldn't have used a diet in the past, but this is the first time I've broken down and committed to it. I wish I could be there to help you with your crafting resolution. But then I would probably fail at my goal to cut back...

I miss you, too, Mary! I want to see you before that baby comes, and then lots after that baby comes! You are, as always, very generous in your assessment of my mothering. If only being a good mother could really be deduced to the number of hours spent planning parties... then I'd have been translated.

Miche, that quilt material is called Panache (a line of moda fabric) and the squares were purchased pre-cut, so it wasn't terribly time-consuming. Go to it! Maybe we were "more clever" back in the day because we thought everything each other said was hilarious. Our husbands are harder to please. =)

Don't forget that the times you say "Oh My God... insert child's name here." counts as a prayer... it is just that the quiet meditation of the past has changed to the on the run short prayers... Also remember that three kids means clutter and as long as they don't stick to the floor in the kitchen it is all good!!

I love reading your posts because you are so clever and funny AND a great writer. I think your best resolution is "to survive this year" with three kids so small miss over-achiever girl. I wish I were as skinny as you. You always look gorgeous. You are just right as you are -- crafting, morning PBS and all.

found your site today and really liked it.. i bookmarked it and will be back to check it out some more later ..