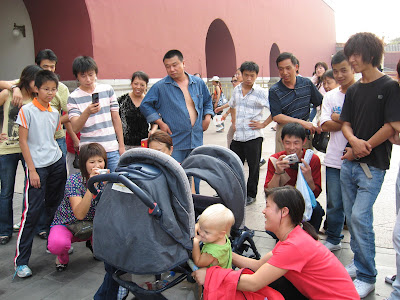 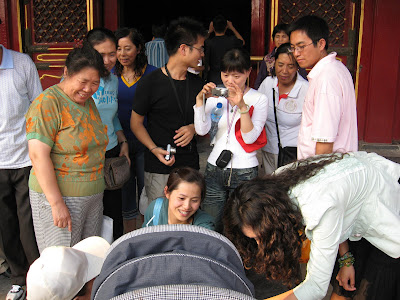 After a month adjusting to life in , last weekend, we finally made it up to for a fun-filled day of sight-seeing and bargaining. Our branch rented a bus for the 2-hour ride leaving from to , and after a couple hours of delay we arrived in the surprisingly clean, uncongested, and nicely-lanscaped city (perhaps improvements prompted by the Olympic committee?).When we first arrived, the bus dropped us off at the Pearl Market (where they actually do sell pearls- the more mature women loved it), but you can find plenty of knock-off Nike shoes and fake Rolex watches, as well as buckets of other clothing, jewelry and electronics. Behind the main market was a smaller market full of toy vendors; this was our first stop in hopes of finding something to occupy Ellie's idol/destructive time. We were sorely disappointed with the prices (we are cheap, and as we eventually found out, we are even cheap for China... and I'm not sure if that's a good or a bad thing).

After insulting several sellers with our demands of low prices, we did end up buying several items including some wooden vegetable cutting kit that Ellie loves. She's in that mimicking stage of life and loves to be able to cut her onions and eggplants while we cut ours. Luckily, she understands that we only put mommy and daddy's food in our mouths... we can never be too sure about possible/probable presence of lead or other contaminates in the paint.

After some "practice time" in the toy market, we moved on to shoes, socks, and other enticing non-essentials. Tiffany's Chinese blood has been pumping harder in the Motherland, and her ancestors have been molding her to to be a real "Chinese," including breaking sellers down to the lowest price. I am particularly impressed with Tiffany's skills, not only in smashing vendors' hopes to rip-off ignorant foreigners, but also with her stubbornness to speak Chinese! She has significantly improved her market conversation skills because she rarely mumbles her native tongue to the sellers, even when they speak English to her. 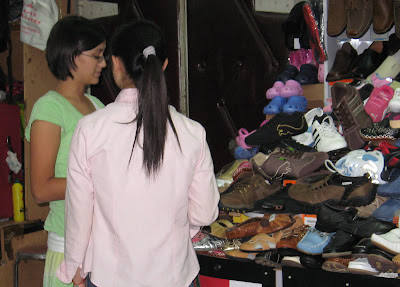 As to bartering, we've adopted the "Mean Boss" technique from a friend who used to live here last year. (Thanks Amy- it works like a charm!) As seen below, Tiffany gets the price as low as she can by herself, while it's my job to hang out in the corner with the kids (and hold all the money). Then she comes to me with her request... which I always firmly shut down, because it is my hard-earned money you know. After some persistent persuasion, we usually get a little more off- all I have to do is be the bad guy, which is totally worth it because I value money over what people think of me! They sometimes call me a "mean boss," but one went as far as telling Tiffany that she needs a new husband: a Chinese husband who lets her buy as many jeans as she wants and is not so controlling--is that ironic to anyone else? (Even a quick look at modern history will show how controlling Chinese men can be...) 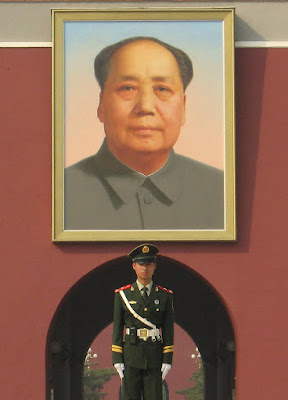 For sake of time, the rest of our Beijing excursion included the historic Tiananmen Square and the Forbidden City, getting somewhat lost trying to get to the subway (our first time on it), eating at our favorite American fast food joint Subway, and stealing more deals at the Silk Street Market. When we made it back to Tianjin, our branch president took the opportunity on the side of the road to extend a calling to me: Sunday School President. Since then Tiffany was called to serve in the Young Womens (there are 2 young women, who speak Chinese and minimal English...). We will stay busy. 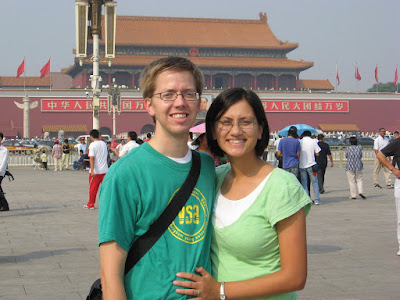 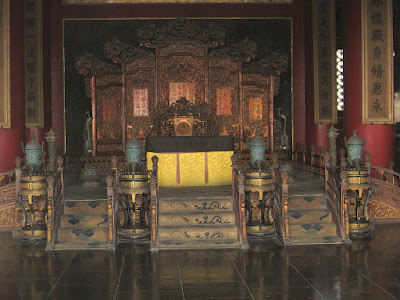 Sorry for the quick summary at the end there... we have to leave now to the train station for a week-long vacation (it is a holiday here). We will soon post about Shanghai, Nanjing, Hangzhou, and Suzhou as soon as we get the chance!

If you are a devoted sports fan, you may already know that Tianjin is one of the host cities for the 2007 Women's World Cup! We, along with our friends Chris and Emily, were fortunate enough to be among the lucky 60,000 to get tickets to the CHINA-New Zealand game last night. The new stadium is amazing. Here is a shot I got of the first goal of the game in minute 57 (China completely dominated the game offensively, but NZ's defense kept the Chinese from completely wiping them out--the final score was 2:0):

Though we took the "long way" to our seats, the stadium workers were a great help. In fact, the first one carried our bag for us and had us follow her up and down stairs until we got to our section. Chris and Emily arrived waving mini New Zealand flags and I joined them in cheering on the underdogs who share our racial background, to the embarrassment of Tiff. She shook her head and rolled her eyes at us, asserting that New Zealand stood absolutely no chance against a team that got to choose from half a billion people, and 60,000 highly patriotic fans.

All the workers loved our foreign babies... several of them had their picture taken with them. They didn't seem to mind that Ellie wouldn't look at the camera and Didi was bawling. He was miserable the entire game, screaming like that kid's never screamed before under the stress and fright of fans screaming at a decibel level that shook the stadium, so Tiff took him out for the first half of the game trying to calm him down. Unfortunately, there was nowhere at all to sit down, but one doting worker (on the far right wishing us peace, Asian-style) offered Tiffany an apple for Erik and then walked her all around the stadium to find the first aid booth where there was a sole chair for her to calm him down and nurse. Later, when I went to find them, she chased me down to tell me where she was and that she was okay. She went far beyond the standard usher duties to make us feel extra welcome. It would be easy to take her kindness for granted, but we hope that we don't. There have been many strangers in China who have been very generous and accommodating--much more than we're accustomed to in the U.S. It was a refreshing reminder and made the team's victory even sweeter (for Tiff). 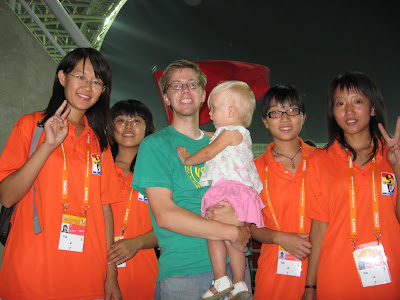 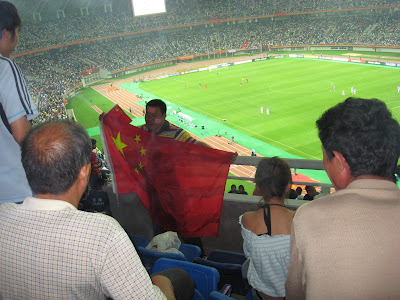 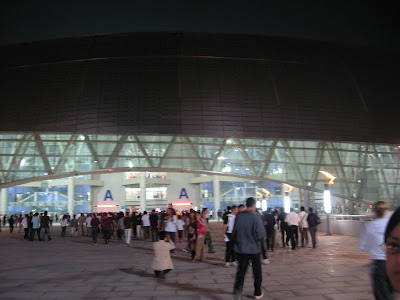 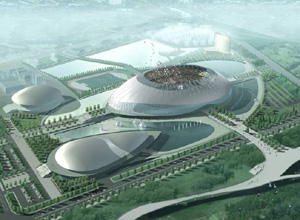 (This is how the stadium should look like on a clear, less-polluted day, though I suppose we'll never really know.) 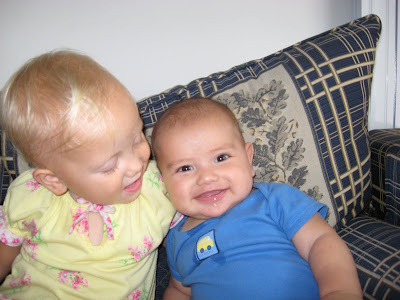 Well the good news is that we found a loophole in the restrictive Internet system here, so let the blog-life roll! …at least for now. During the past few months or so, we have had an adventuresome transition from college-life to the realities of the real world—forsaking our simplistic responsibilities in Provo (which usually seemed to revolve around food and fun) as we moved across the globe to a complicated nation where many natives don’t even understand their own system.

Of course, the foreigners are expected to somehow figure out and adhere to the many unforeseen complicated procedures and processes in order to get the necessary permits and registration. At times during the first few weeks we felt like… hmm… maybe like imported monkeys trapped in an unfamiliar land where the natives stare, poke their kids, attempt to communicate (and then persistently talk louder and louder when they don’t understand), when all they want to do is find a safe home for their family where they can eat some freakin bananas. Unfortunately, “Sticking it to the “Man’” only works in American cinema and politics where attitude, ego, and having the last word often determines the winner; here you just get eaten-up by the other 13 million people who share your town, no matter what you do. The Chinese are more prideful than a bag full of Texans.

Notwithstanding all the sarcasm and initial challenges, we are are really enjoying our foreign experience during this exciting time in China's development (including improvements made in preparation for the Olympics next summer). We've even made some good friends from Utah who also understand the initial bipolar experience. 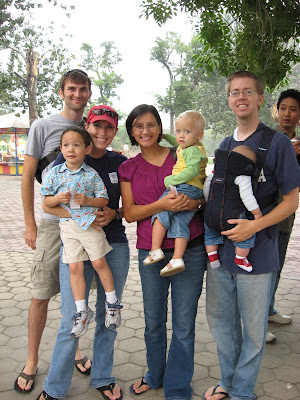 is a great city for us. We have all the conveniences of a big city, yet we feel like we are truly having an authentic experience. Though its large number of residents make it the 3rd largest city in the most highly populated country in the world, there are relatively few foreigners (almost all of them are Korean which makes us white-folk stick out even more), and it somehow makes us feel a little special in some weird way. We are slowly coming to grips with the fact that someone is always looking at us... even following us sometimes... 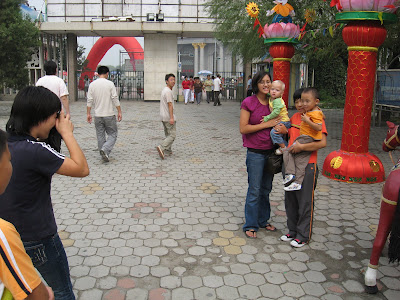 Every block has an amazing Chinese restaurant where you can eat for pennies (though the picture below is not representative of the yummies available here: everything from saucy lamb leg to fragrant wood fungus) and just down the street (though a 15-minute traffic-congested taxi ride) is a supermarket where we buy everything from diapers to peanut butter. Right outside of our complex is a vegetable/meat/odds n' ends market where Tiff gets to do the daily produce shopping and pursue her goal in adventurous eating: trying every ice cream bar the city's got to offer by December. Though we have yet to go, we are only an hour-and-a-half train ride from Beijing where resources for Westerners are ultimately endless. Here in Tianjin, we are only a few minutes away from the brand-new and highly-acclaimed stadium, which is one of the major soccer venues for the 2008 Olympics. And anytime we are feeling a little homesick for some "all-American" cooking, the city is packed with KFC and McDonald's franchises. In China, though, the Colonel sells mostly corn and green bean sandwiches disguised as chicken. 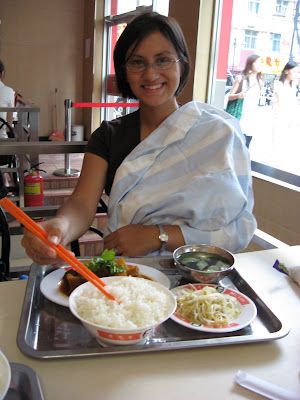 We are also very pleased with our living arrangements. I live only a few minutes away from work so I can come home for lunch everyday, maximizing my time with the family before and after school. We are renting a 3-bedroom apartment on the first floor in a desirable neighborhood (which means no stairs to climb). There is also a park with slides and swings that Ellie loves, as well as many peaceful gathering areas around serene ponds and fish-filled streams. Though our private community is named "Fragrant Water Gardens," the fragrance is usually sewage (due to a nearby construction project). It does not take long to observe that China is chock full of irony. We're taking the bad with the good and are grateful to be here. 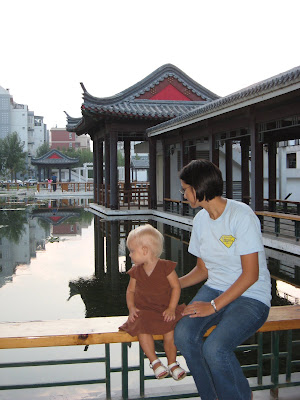 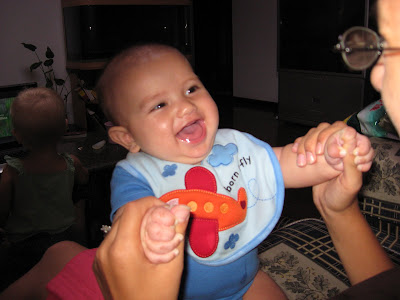 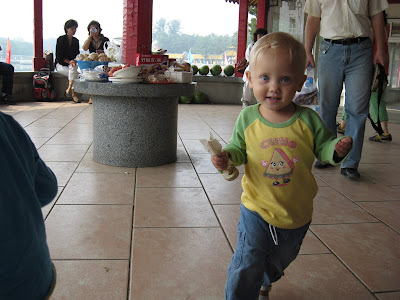 We are extremely happy to be able to continue our blog for now and hope to hear from you all soon!