Remember that old Tiff of yester-year who was so frazzledly busy whipping up handmade Christmas gifts and decorations that she almost missed the whole Utah Christmas season? Thankfully, that Tiff did take the time to visit the Festival of Trees with Kyle, sans kids even. LOVED it and only wish we'd had a few more hours there to enjoy all the creativity and festivity oozing out of these branches.

These next two scored style points. 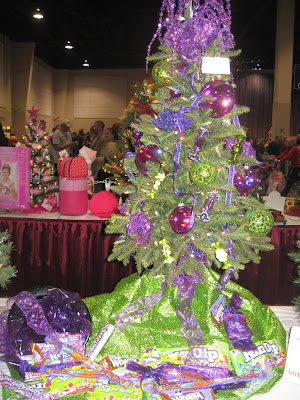 (much prettier in person) 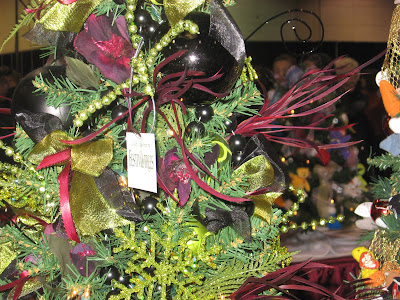 This might have been my favorite-- can you imagine what a blast I would have had putting together this display! 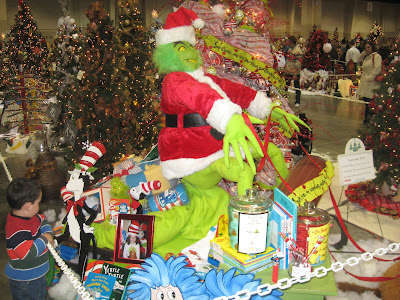 This is the tree I lusted after most. Before I quit crafting, that is. (And actually I have my very OWN cricut now, thanks Santa Ma & Fa!) 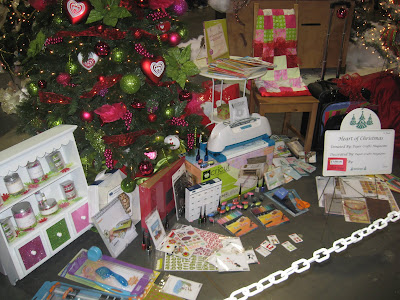 I swear all of these trees looked a bajillion times cooler in person. 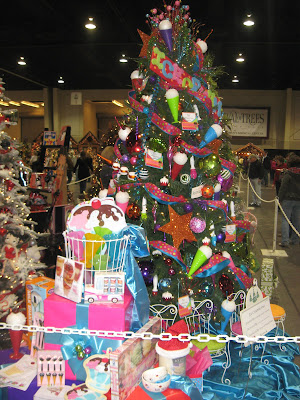 The camera was running on a drop of battery juice so I didn't snap half as many as I'd like to have, but we did fortunately manage to capture Kyle's fave, The Labyrinth themed. 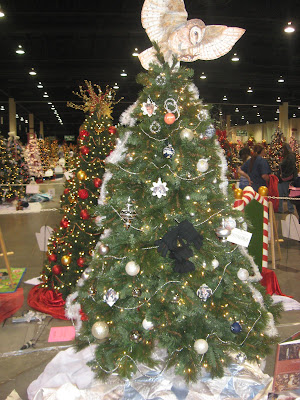 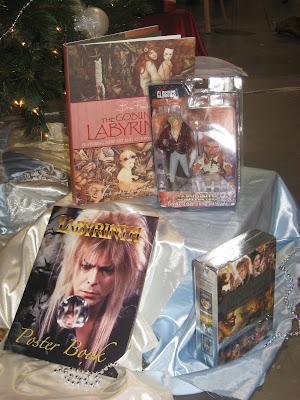 Back at the homestead, November 30th sneaked up on me and we had only a morning to whip up an advent calendar. The kids brainstormed and I went wild with felt and scissors. And 24-ish days later the tree looked like this. 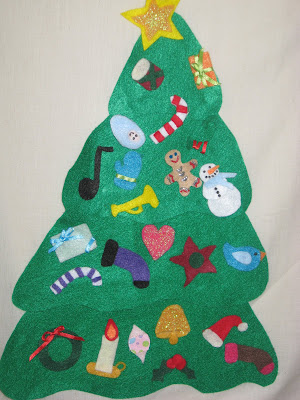 We put each mini felt ornament in one of the stockings hung on this line. Talk about inexpensive Christmas decor-- between the four of us (Kyle is sadly lacking in the festive sock department) we had more than enough Christmas colored socks to make a month. 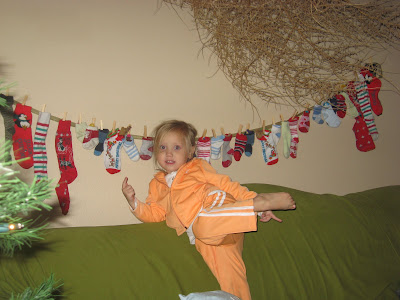 Well, once I threw in blue as an alternate Christmas color we had plenty. 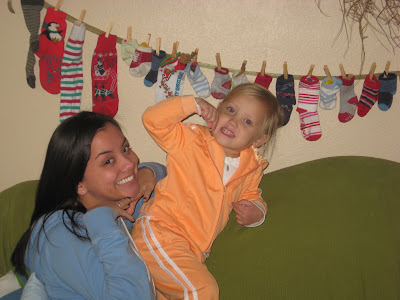 Meet Fievel. I woke up one morning to this enormous weed in my living room. I knew it was Mish's doing--she's always been a softie for lost/abandoned baby animals and desert plants. Mish's friend thought she wouldn't find anything useful to do with it, and that's exactly why we proved him wrong! A hammer and two nails, string, a bottle of hairspray (for the shedding), some mad skills, and BAM! Fievel-ocity. 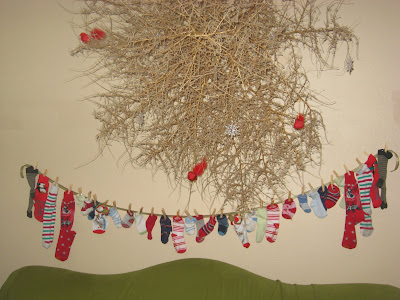 This was our attempt at a Christmas-y feast for the olfactory senses. Only since they're just applesauce and cinnamon, they probably didn't need to be baked. That would explain why they turned out a tad distorted and brittle. I will make a better garland next year, now that I inherited my mom's Christmas cookie cutter repertoire. (I am actually amazed with all the enthused stamping and squashing of four kids, that all four letters of "Noel" survived.) 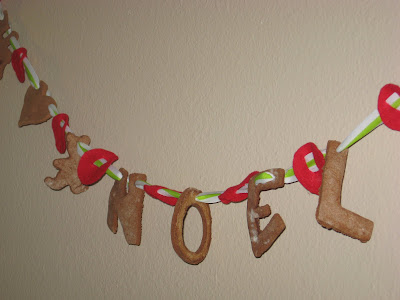 Again, good intentions. In my mind, this was a Christmas craft the kids could participate in and enjoy. Only I wouldn't recommend letting your kids use a hot glue gun, so it was just a me craft. And I had already gone back to the store once for more spice drops and that third trip never materialized. There was also the prototype of a red and green m&m tree. Next year I want to make some stuffed gingerbread dolls that have a bite taken out of them (saw that super idea somewhere in the blogosphere). Maybe a whole Christmas candy village, with gingerbread houses and candy cane lamp posts and glittery frosting snowfalls. Whoa now! Let's not get carried away, Tiff. Crafting hiatus, remember? Don't get emotionally ambitious just yet.

Oh yeah, on the right there are winter scenes the kids made with stale spice drops left over from our 4th of July crafts. Erik's is a mushroom garden and Ellie's is a Christmas tree and African American Santa. 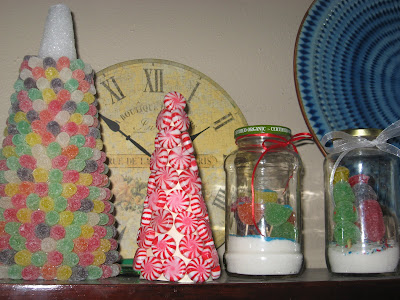 Even with the lens zoomed in, this still looks kinda pathetically small for a Christmas tree. Six feet sounded like it would have a commanding presence, but we had to put it on top of our end table to make it taller than Kyle. All my Christmas ornaments and decorations live it up in my parents' garage, so Dollar Tree helped me furnish the branches. Nothing impressive, but it was pre-lit magic to our little family every December evening. 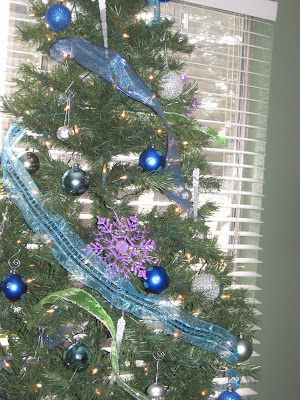 This was a little something that was supposed to go out to everyone Mish and I know and half-know, but time was short and ice cube trays scarce. Hot chocolate on a stick, people! How simply brilliant is that!? (Wasn't my idea, of course, although I did improve upon it by rolling them in marshmallows and crushed candy canes.) Other than having the slightest taste of wood stick, stirred in hot milk it was pure winter delight! 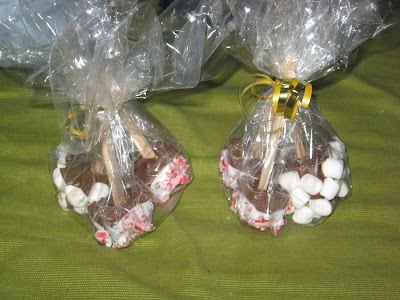 The other goody gifts we endeavored this season were sundae kit baskets. That's Grandpa Larsen's homemade fudge sauce, chopped peanuts, ice cream scoop, and a baby food jar of maraschino cherries, and some were fortunate enough to be wrapped in cellophane before the blasted three rolls ran out (That stuff always runs out prematurely. I never learn.)

Sad story about these baskets, though. First, it was late on the eve of our departure to Sacramento (road trip, by the way). Second, we burned the vat of fudge sauce. Third, I ladled it into the jars anyway (We were fresh out of chocolate chips so deemed it salvageable). Fourth, we spent way too long, suffering under a hot glue shortage, covering the lids with fabric and ribbon so you couldn't tell they originally contained salsa, pickles, pesto, etc. Fifth, after we had assembled them all, I opened up a jar and the fudge sauce smelled like pickles. Sixth, they all stank. (Only the caramel sauce jar and grape jelly jar survived.) Seventh, we laughed, cried, and went to bed. The next morning before delivery, Mish supplemented the baskets with Nutella. Eighth, I was too sad to throw the stinky jars away until after we came home from CA. In the end, even I could not concoct a reasonable use for burned salsa-flavored fudge sauce. 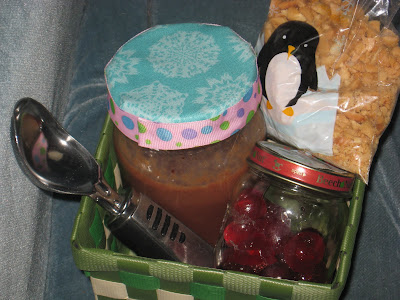 These stockings took most of the season to make. So long that I didn't even bother clipping the threads before I took these photos. We better use them for-freakin'-ever. 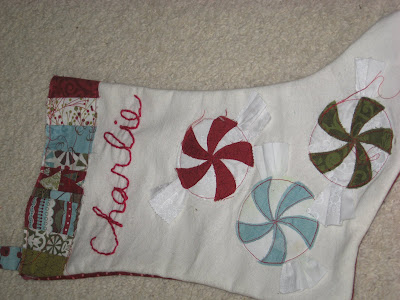 I fell in love with moda's Figgy Pudding fabric print line months ago and had pre-cut five inch squares slumbering in my fabric closet for a long while before I figured out that stockings are not made of five-inch squares. No one has ever made a stocking out of five-inch fabric squares (believe me, I did my research), and I wasn't about to be the first. So, I improvised. 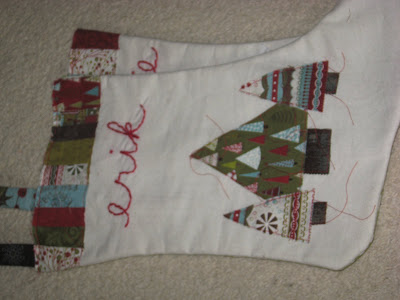 I gleaned inspiration for the appliques from a post on u-create and made up the patterns as I went. 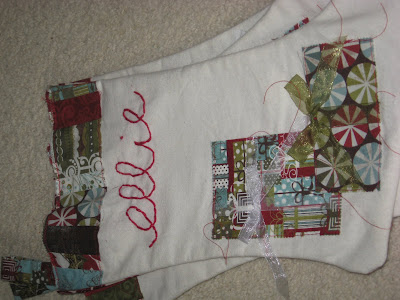 The embroidery is pretty amateur and wonky, but hey! So am I. 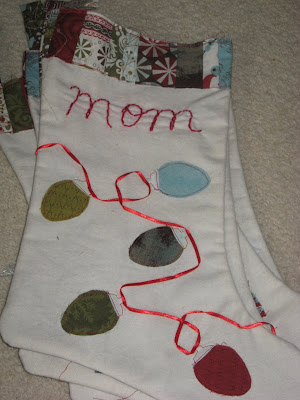 Okay, now that I'm done whining about making these stockings, I can confess that I'm actually satisfied with how they turned out. 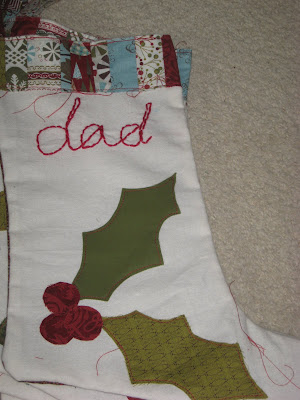 Any future additions to the family better be okay with a store-bought stocking, though! 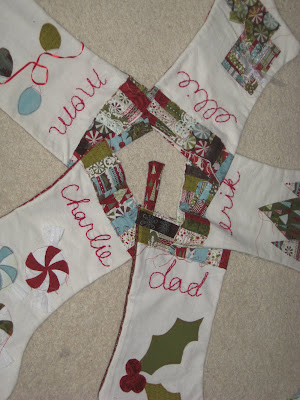 And then there was Christmas in Sacramento. Soooooo much fun. A spontaneous visit to Disneyland didn't hurt. Pics and lengthy captions coming up next.

I love the stockings, and my hubby eats the nutella with a spoon every time he passes the cupboard. Score on both accounts.

Way to be so overly ambitious (as usual:)). You're my hero.

I love that advent calendar and the mismatched stockings on a string. So cute! Tiff, the stockings you made are amazing. You are so talented.

That was a sad, sad story about the hot fudge. But, you told it in such a funny way. That sounds a lot like the way things go around here when I try to be clever :-).

I LOVE LOVE LOVE the stockings. Even better than my own. And I also love the festival of trees and Blaine and I have decided that someday when we're rich, we're getting our trees from there every year.

You are my craft Idol.