Q: What do you get when you cross ME and Old Navy's end-of-season mega clearance sale?

A: You get this 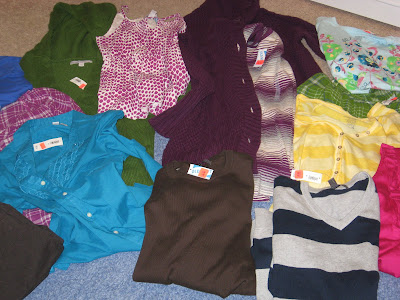 and you get all three of these 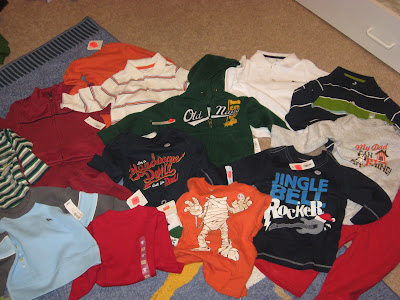 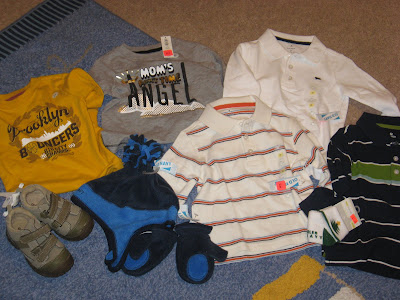 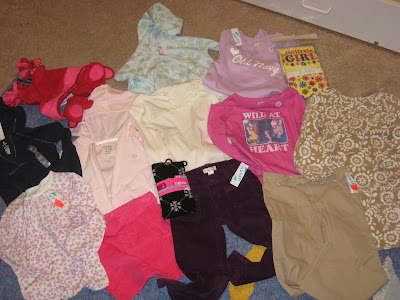 And that averages $2.33 an item, people (after a 10% off coupon just lying around at the register). Granted, there are a few t-shirts and small items in there, but there are also pants and sweaters! Kyle scored nice sweaters for $3 and $4! Can I tell you, I haven't had a thrill like this since last month on Splash Mountain. And before that, for a long time. Also, Old Navy is brilliant to put kids' movies on in the store. Otherwise, Kyle and the kids (but especially Kyle) would not have lasted the two hours it took me to collect my winnings through five clearance sections and then reduce the pile by about 50% (for Kyle's sake).

So, I pretty much cleared out most of Old Navy's inventory during my spree, but there might be a thing or two left for you if you head out early tomorrow morning. I believe the sale is nation-wide. (And if I can fanangle it (why isn't that coming up as a real word? Isn't fanangle a word? Bob? Kristin? Other Boggle gurus?) without a certain someone finding out, I might be back tomorrow. Woo-hahahaha! The ruthless bargain queen strikes again!)

P.S. I realize it can be argued that being out $120 to clothe a family that was not previously naked may not sound like a bargain. For the record, I only do this once or twice a year, at the end of the seasons, and almost all of the kids' clothes were purchased for the next size up, and unless this diet works, I needed some better-fitting attire, and also, I know it's still superfluous. But I used my birthday and Christmas money from Kyle's parents to fund it. That was so Kyle would still want to be my friend. Okay, done trying to justify myself. 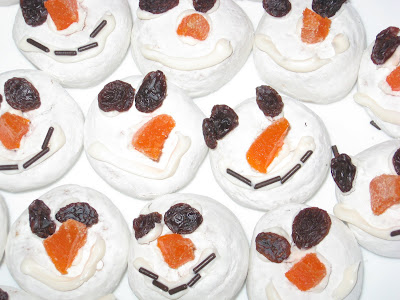 There's nothing like the thrill of getting a good deal, even if you're spending money to do it :) Cute snowmen!

Quel coincidence..I just hit up Old Navy myself and scored some jammies for $1.27. You taught me well.

Amiable brief and this fill someone in on helped me alot in my college assignement. Thank you as your information.

OK, the snowmen finally convinced me your spree was to be applauded. Funny how that could work as a final argument...
and it's finagle, only one "n" in it.

I'm so jealous! I heard about the sale and was so close to going out myself. Looks like you scored some hot loot! Way proud of you!

I'm so jealous! I heard about the sale and was so close to going out myself. Looks like you scored some hot loot! Way proud of you!