Don't be fooled by these next two pictures of Erik's lovely olive complexion-- it is actually jaundice! Or at least it was. Erik's bilirubin (yellow pigment poorly broken down by his immature liver) level continued to climb after he left the hospital, forcing us to have his poor little blood drawn daily. Finally they sent us a bili-bed, a home tanning kit that took care of the rest. He only had to be under the lights for a day and a half (out only for feedings and diaper changes), but the four of us were pretty miserable about it the whole time. Erik struggled against the insecurity of his naked limbs having full range of motion. Kyle and I hated having to leave him there, blinded by fuzzy goggles as he cried. It was probably hardest on Ellie, though, who was not allowed to lay eyes on the blue lights, but was clearly concerned for her brother's welfare and spent a lot of time pounding on the door calling "Dee dee! Dee dee!" (Since Ellie struggles with 'r's and 'k's, we let her call him Deedee, which means little brother in Chinese.) Alas, it is over now and he is glowing in pinkish splendor again. 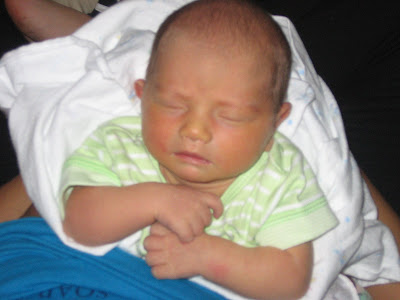 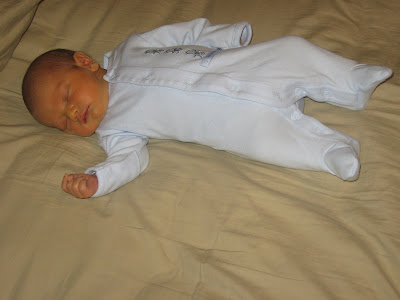 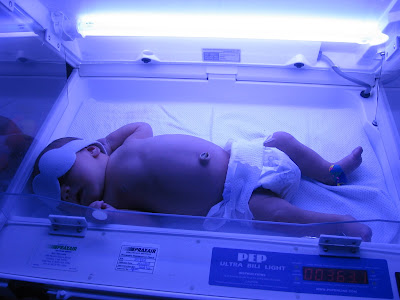 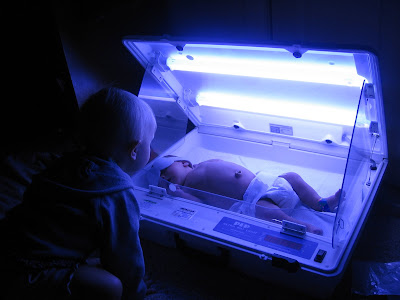 That is so cool that you had a home tanning bed! We had to stay at the hospital sleeping in chairs for three days when Bims had jaundice! Erik is adorable as ever...keep the pictures coming!

Your babies are super cute! Congratulations!