We were able to catch this shot in the half hour he was awake during his hospital stay. 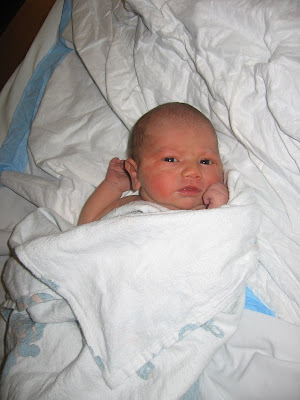 Well, there has been a lot of speculation... and the guessing prize goes to Jeff. His middle-name guess "Thered" (as in Erik The Red) put him far ahead of the competition for: (1) creativity and (2) being the only guess we were actually informed of. He has won the privilege of calling the newest dude "Thered" during his embarassing puberty years. Besides, if you take "Thered" and switch the letters around, add some more, and then take some away, it spells out Erik's real middle name:

君明 Junming
We were a little nervous to give him a Chinese name ourselves because of our limited knowledge of Chinese. We didn't want to be the equivalent of those Asian immigrants in the States who name their newborns "Freedom" or "Chrysanthemum" ...it just doesn't sound right. We spent a lot of time on the web the past few days experimenting with name combinations that are legit, look good, sound good, and have a meaning that we love. Tiff vetoed my first two choices because of her English bias (Kai-yun, which she claims sounds too much like a kid's show Caillou that she hates, and De-ming, which she claims sounds like Dummy).

An over-simplified translation of Junming (pronounced similar to Joon-ming) could be Bright Gentleman, but its historical meaning is much deeper than the English words have to offer. In Confucian China, the highest honor was to become a Junzi, or a "gentleman." Confucius taught that through education and a lifetime of experience, people can become the embodiment of virtue and humility. Because of their superior example, their morality would "trickle-down" through all social classes creating a society of order and respect. In terms of the gospel, one of my professors explained a junzi as somebody who has "no more disposition to do evil," and therefore is free to do as he pleases because his desires are so unalterably pure. Ming is very complementary; it means bright and intelligent.