I have no less than ten drafts awaiting elaboration in my "edit posts" file. They each require elaboration, though! So since my entire family is peacefully slumbering at the moment and I wish to be doing the same, I will quickly share an update of my four favorite people.

1. Kyle gets up every morning before I've even begun my final rem cycle, changes Charlie's poo, and fetches the cereal boxes from atop the fridge so Ellie can prepare breakfast for the crew. Then he works hard at a job he LOVES for only eight hours a day and is home for dinner. Don't get used to it, Tiff! Too late!

2. Ellie gave our Family Home Evening lesson on Monday because she was quite enthused about this object lesson she had developed. It went like this: she gave a plate of apple slices to Charlie and Erik for their immediate consumption and promptly left the room. Moments later she returned, shaking her head, then solemnly breaking the news to us that, "You weren't ready when I came. I'm Jesus, and you're not ready." Then she had Kyle read the parable of the ten virgins and bore her testimony about preparing for the second coming. (by eating your apple slices faster?) It was such a good effort, though, and made perfect sense in her spongy little cranium.

3. I really wonder about Erik in the public school system. Yes, they teach you to read, write, do arithmetic, and interact socially, but are they equipped to support the inner workings of Erik's imagination? The simple task of writing his name often becomes a very involved process. Each letter assumes the appearance of a stranger life form than the last, each with an increasing number of unusual characteristics. I don't know how he'll do in the legibility department, but at least his letters have multiple personalities... Extra credit???

4. One of Charlie's numerous "adorable" habits as of late is the spontaneous stripping of his pants and diaper, a hurried exit from my presence, and soon a confession that he did indeed intentionally pee on the carpet. Clearly, he is aware of my disapproval and yet the frequency of "purposes" (it's not an accident!) increases. Today I checked on him in his time-out corner (yes, he spends a lot of time there for various infractions) and he immediately admitted that he was standing in a puddle of his own urine. What was puzzling was that his diaper was completely intact and DRY. Upon closer inspection, of course, I gained a greater appreciation for his dexterity-- the kid thought to pull his little hose out the side of his diaper and let it run down his leg. Ingenious. So, is it time to commence potty training? Or just to up the severity of his punishments?

So, that's a snapshot of my four faves. They have their cute and not-so-cute moments, but every one of them has lovely, snuffaluffagus eyelashes. That makes up for a lot, especially when they're asleep. 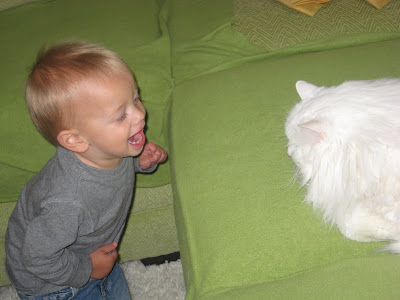 Kids are so fun, aren't they? I love Ellie and her imagination and Erik for working hare at a project and Charlie? for keeping his diaper dry? Oh my!

This is my favorite post ever, no joke! I freaking love those kids!

Tiff, you are hilarious and all these stories were very funny. However, I think Ellie's object lesson was my favorite. I really did laugh out loud. So funny.

Shucks, that Charlie...I'm over here laughing and snuffling. I'm so glad we got to see him for at least a few ticks in passing! And I don't know about name-writing, but kindergarten is still a pretty imaginative place. I think Erik'll do fine.

First off, CONGRATS on that new babe coming in December! That is so exciting. I don't know how you do it girl. Secondly, I'm sorry to hear that the D-Land trip didn't go so well (we have had our share of days like THAT at Disneyland - at least I always had Brian there to share). But, you and your friend look really tough in the pics pushing three littles around in strollers while she has one strapped to her chest. That was a very ambitious try. You'll have a better trip to replace those memories in the future. Give it a few years. Hope you are feeling better by now. Hang in there!