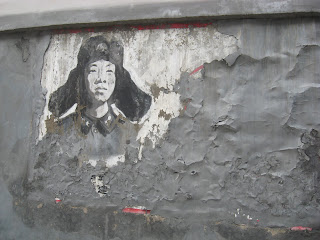 I snapped this picture while wandering through some Hutongs on one of my last days in China. To me, it symbolizes China's philosophy on self-development and modernization. In their mind, covering-up endemic social problems and a messy political track with a fresh coat of paint will buy enough time to merit international recognition for development, and maybe most importantly, create an enormous surge in national pride. As you can see above, though, Chinese paint isn't long-lasting, so, the previous paint job will undoubtedly resurface in due time if proper problem solving skills are not utilized.

The underlying portrait is reminiscent of the Cultural Revolution, which is among the most horrific periods in 20th century world history. China has downplayed their historical atrocities by removing condemning details out of its books and memories. Sometimes people have blamed national problems on others (I've heard that many blame Mao's Great Leap famines on Chiang Kai-shek, even though he'd escaped to Taiwan years before). In a similar fashion, very few young people in China have any idea what happened on Tiananmen Square back in 1989. And since their parents don't dare talk about it, the demonstration has been pretty much erased because of political convenience, through intelligent propaganda. Even individuals in government who speak opposing views are systematically "Photoshopped" out of history, such as former Premier Zhao Ziyang, notwithstanding his unquestionable influence on Chinese reform. This is one way China demonstrates their omnipotence.

While visiting the uncle of a friend for dinner, I noticed that his expensive new home was laden with Mao Zedong quotes and memorabilia. He was quick to attribute his new-found wealth to Mao even though the economic reforms allowing this kind of wealth, ironically, didn't even happen until Mao was dead and replaced two times over (by the man he ran out of office because of his economic reform ideas). Somehow this man had forgotten his youth when Mao directed the masses to run the wealthy out of town, sometimes to be killed, if their conformity wasn't up to par. Now Mao was the national hero of private property??? Listening to this man, and others in China, shows me the convincing power of the Communist Party propaganda over the masses. Their "new paint job" has successfully fooled most of the Chinese, and much of the world, for now.

Even within the short year I was in Tianjin, I saw the local government do many things to give the international community a new paint-job image of China, in preparations for the Olympics. Here are some that come to mind:

Massive reconstruction projects, every building and bridge more than a few-years-old required a new coat of paint, dilapidated buildings finally razed, unnavigable bumpy roads suddenly redone (the road by my house was repaved twice because the cheap materials wore out after a few months, which implies short-term development intentions), restrictions put on factories and drivers to reduce pollution just before the Games (and only then), and incredible landscaping projects along the road to beautify the Olympic torch route (looks good on TV and in pictures)...

I was especially surprised to find that the romanization on every city road sign was replaced last month to change the word "lu" to "road" (ex. Zijinshan Lu became Zijinshan Road)--a nice gesture, but the change probably wasn't worth the massive amount of public funds used to make the insignificant transformation. Officials say that these projects have changed Tianjin into the cosmopolitan city it seeks to be, or at least gives the appearance of it.

Though I hope they prove me wrong, I have no faith that China will continue these projects once the Olympics close; it seems that they have already served their temporary purpose. If they cared so much about development for the good of the people, they wouldn't wait for the Olympics to do something about it... and they would pick more projects for the benefit of their own people, not to suddenly appease the international community.

The way I see it, it's like putting a bandaid on a major flesh wound: it may cover the injury, but the wound still festers underneath. Proper recovery requires proper treatment. Or in less-grotesque terms, maybe it's like cleaning your room by filling your closet with junk from the floor, hoping that your friend doesn't open the closet door. It doesn't fix the problem! But it may postpone the need to solve--which I think is the underlying reason.

Because I love China, I sincerely hope the government is empowered enough to fix the festering problems hidden by the new paint job, to build a fair and trust-worthy nation setting aside political ideology and putting the people's needs first. As much as I hate to say it, I'm not convinced they ever intend to at all, and I hope they prove me wrong.

After my wanna-be discrete photo-shoot, I was tempted to peel off some more of the paint to reveal the propaganda text (only word showing is "建" which means to build, as in 'build the nation'), but I felt uneasy with the paramilitary guards standing at their post, staring at me from across the narrow alleyway. In China, someone is always watching.

Cutting my own hair

Like many of you know, I have been cutting my own hair since high school. In China, however, I took my chances with the local Chinese salons, which made me a little out-of-practice for today's haircut... the first one in over a year. As I am expecting a number of job interviews with this haircut, I figured it's not the best time for sudden bald spots in unnatural patterns or places.

Contrary to common thought, cutting your own hair (for a man) is not very difficult, as long as you cut only a little bit at a time. Hair products have successfully hid most of my mistakes.
As these thoughts eased my spirits a bit, I remembered an experience from Cambodia in 2005: 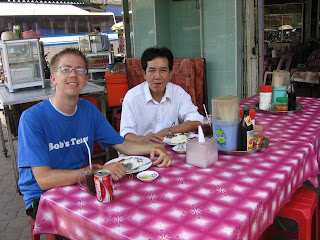 Because I helped a friend translate some of his documents into English, he insisted on treating me to lunch... and a haircut the next day (he's a barber). When I sat down in his chair, it didn't take long before the interogation started:
"Where did you get your last haircut?"
"In America."

(He silently began to chop my hair, circling my head like a vulture ready to eat.)

"Hmm... Did an American or a Vietnamese cut your hair?"
(not knowing where the conversation was going) "...an American."

"It's just AWFUL. I can't believe how horrible your stylist is."
"Oh... really? I hadn't noticed."
"Yes, I don't think I've ever seen a worse haircut."

I didn't dare reveal the fact that I was the offensive barber--he would have been too embarrassed. For the rest of the cut, he didn't stop complaining about my hair, generously adding comments on how he would make a fortune if he moved to the U.S. because he cuts hair evenly. "When I make it to the States, I'll always give your haircuts for free--never go back to that barber again."

Well, I'm sorry my Vietnamese friend, but I'm back in the States... and I'm too cheap to see a new barber.

Or is it ketchup? At any rate, I have a lot of it. Blog catchup, that is. And by the time I get around to all this ketsup, my short list will look something like this...

These trips have been and will be interspersed with good times on the Goodwin homestead, filled with late-night Olympics and The Office viewings, unpacking and rediscovering the glory of our storaged belongings, the love of a crowded home, enjoying this new house and its amenities, and sleeping in on a soft, American mattress. No complaints here. Life is good.

I think I just might not believe you if you told me I was living in China three weeks ago, so far from the comforts and relationships I've been enjoying with great leisure these days. Indeed there was no culture shock to be had upon my return to my motherland, and why should there be? Yes, everything here is expensive, it's hard to stick to healthy foods, and our lives have already lost the solitude and simplicity life as an ex-pat in China rendered. Yet how could I turn back with longing, for this is home. The background noise, the road trips, dairy-laden dinners, clearance rack clothes shopping, dinner table discussions moderated by Dad, a never-ending array of snacks and treats emanating from Mom's kitchen, late-night talks with close friends, the texture of carpet, the smell of clean water, the feel of security, serenity, and ease. I am home. Yes, I am finally home.