Congratulation to Me, the almost-native

Yes, I will toot my horn on this one, partially because nobody else (who speaks English) was there to witness my spectacular achievement and boast on my behalf. I had to do it without waiting or thinking, otherwise I would have recognized I was setting myself up for failure and frustration, and thus never would have accomplished such a feat. 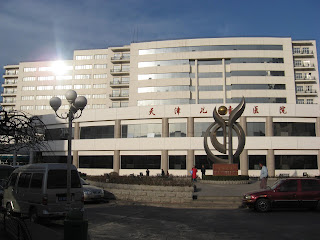 Few environments are scarier to me than Chinese hospitals, and I maneuvered through one and the whole slew of associated processes last Friday SANS translator. Be impressed. Be very impressed. If you're not, you may need to revisit our post on hospital experiences in January to glean the severity of my task, but even then it can truly only be captured by experience, so you'll just have to take my word for it.

What looked like mosquito bites on Didi's back and hands multiplied over a period of a few days, and by Friday morning they were covering his hands and feet and (gasp!) even a few near his mouth, causing me to momentarily fear the worst (aka Foot/mouth/hand disease which have had some deadly outbreaks among kids in China recently). Also, I've allowed myself to get about eight months behind on Didi's immunizations because obviously I try to avoid Chinese hospitals, and words like diptheria and hepatitis somehow haven't worked their way into my humble vocabulary yet. I had it on my "to-do" list weekly for several months, but previous troubles at the imm. office contributed to my deep desire to procrastinate. So, my ayi (household helper) was convinced that Didi had contracted one of those diseases that he should have been vaccinated for already if I hadn't been such a slacker mom. Without having access to my nurse consultant friend in Tianjin anymore, nor her husband who served as my trusty translator (miss you, Em and Chris!), I was forced to tackle the hospital alone. My ayi thankfully consented to watching Ellie at home. That was our first step toward success.

The second was arranging for a friends' driver to escort me to the hospital. As you may conjecture, Tianjin public transportation leaves much to be desired as far as efficiency and cleanliness are concerned. Under normal circumstances, I cease to be fazed, but when I fear my child has contracted a terminal illness, I am a bit too panicked to deal with long waits and bumpy rides. Besides, I didn't know a bus route to the hospital where Didi gets immunized.

My only bilingual friend who doesn't work during days was helping another friend at a different hospital that day, so I was on my own. Oh, the other reason I loved taking the driver was that I got to say his name/title a lot, which is Lee Shir Foo, meaning "Master Lee." I feel like I should be bowing or at least round-kicking every time I address him, but no. He is a master of the Tianjin roads, which is probably at least as challenging and far more life-threatening than martial arts, if you ask me or a stray dog.

Anyway, the immunization office was inexplicably closed (but the nurse behind the desk was bandaged and hooked up to an iv, so maybe needed a day off???), so we went to the Children's Hospital. Thankfully, I remembered which of the countless counters was for checking-in. I used some sign language to explain our problem and was given a ticket with which I walked around aimlessly for a while until I was directed toward a register counter. It's not that hospital employees are unkind, but truly they're not helpful unless you explicitly ask for direction. They just see too many people all day long to take a vested interest in any one of them, and this includes the doctors. Fortunately, I'm not afraid of talking to strangers, even in my broken second-language, so I minimized wandering time by frequently asking employees and bystanders "wo choo nar?" meaning "Where am I going?" Of course I wanted to ask, "Where should I be going?," but they got the point, and usually pointed me in the right direction.

So, up and down corridors and escalators I went, and seven mandatory locations later, I'd registered, paid for the doctor visit (about 60 cents), seen the doctor, paid for medicine, verified my purchase with the doctor, and finally retrieved the medicine. It was a Christmas miracle, six months early. And not only did Didi NOT have foot/hand/mouth disease (but rather, an allergy to grass that is seasonal and hopefully will not persist throughout his life), but he also cooperated with me by not insisting on walking on the filthy floors and decided to be particularly charming and flirtatious with the nurses. 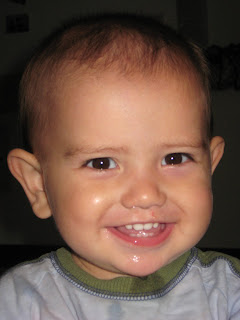 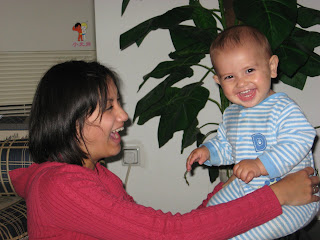 So, that's my latest and greatest accomplishment. You may be thinking, "You've lived there almost a year so your Chinese must be sufficient, especially if you were able to successfully navigate the hospital alone." You may think that, but you'd be wrong. Oh yeah, I did utilize cell phone technology with that bilingual friend to understand the doctor's diagnosis, since I basically understood about 0% of what she was talking about. So yes, basically I understand hardly any Chinese, but I can still express myself in very layman's terms almost all of the time, when we're referring to necessary conversations, nothing deep or philosophical, of course. This is another way in which Kyle and I complement each other, because he understands 50-90% of the Chinese he hears, but struggles to construct sentences verbally.

How my beginner-level verbal Chinese suffices, and indeed in many cases I end up being the translator of choice among foreign friends, is truly a wonder. Perhaps my Chinese ancestors are involved? I haven't learned as much Chinese here as I originally hoped to, but as one who spends most days indoors with little kids or outdoors with English-speakers, I shouldn't be expecting too much. I have, however, developed the communication skill that served me so well on this hospital trip. I will call it the "clever manipulation of 12-word vocabulary plus Olympic-worthy charades" fluency factor. And no, I am no less verbose in Chinese than in English.

Yeah, no duihua's about navigating your way through a child's sickness in China in Chinese 101!

Good for you! I'm so proud. Now you've graduated "Living in China" class and you can come home.

You've left me very, very impressed Tif! Woah! I don't think I would consider going to a Chinese hospital on my own after two years in China. You are amazing!

Ummm, I would never have thought that after a year in China you should know Chinese. Hello, difficult language!!! Congratulations, though, on your mastery of the language (*wink*)! It doesn't matter how the communications happens, as long as it does.

Man, Tiff, that sounded like a nightmare, albeit one with a surprisingly happy ending! I would've felt totally overwhelmed, especially if I wasn't feeling too well that day. That cute Didi sure has a good mom!