So, many of you know that our pet, adorable Teancum the turtle, resides in a comfortable gray $5 tub from Walmart next to our fireplace. 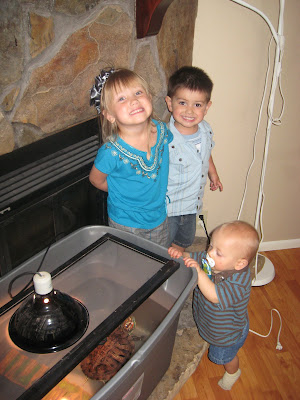 During lunch today, I found a terrible black and red spider that had dropped in the tub for an afternoon swim. Distracted by the heat lamp, Teancum didn't notice Spider chillaxing over there in the corner, doing a little spider dance right on top of the water.

I thought, “Oh, yeah! I bet T will love to eat that!” (He loves to eat bugs and other small creatures we find outside.)

Then I thought, “Oh snap! If he eats that thing, maybe he’ll die!”

Then I thought, “I don’t think Ellie could take another tragic aquatic pet death.” (RIP Gigi the tadpole and Ffff the beta fish...) 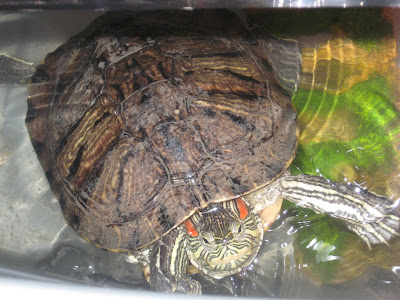 I had to think fast because Tiffany and the kids had stepped away for a moment--now was my only chance to act. After determining that the risks outweigh the awesomeness of watching Teancum eat Spider for lunch, I found an old can in the trash, stuck my hand in the depths of nastiness to scoop it out, and smashed Spider with a hammer! (But, by "hammer," I actually mean "summer sausage wrapper.")

I made sure to pass this on to Teancum's first family. They'll be so proud.

Kyle, you deserve the Medal of Honor for Bravery in the Face of Ugly Spiders!