I survived Arizona in August!

I guess I probably lost anyone who had been following the post-China vacation saga. Well, that's okay because the chapters are, more or less, unrelated. And anyway, here I go again...

We got to rest up for a week or so before Erik and I flew to Phoenix for a friend's wedding. She actually had the nerve to meet her husband after I left for China, so this was my first chance to really become acquainted with my soon-to-be brother-in-law type figure, which we did while braiding (not your easy Pippi brand of braiding, mind you) a dozen or so ribbon leis. Each lei consumed about four hours of manual labor, and that's only if you don't have to undo and restart an hour and a half's worth of braiding you did facing the wrong direction.

But really Mish and JJ get to take credit for most of that. I, along with two of Noe's friends from Provo, got to serve collectively as the honorary maid-of-honor, running lots of errands, arranging the flowers, decorating, etc. The hardest part of all this run-around was the fact that we had to actually get out of the car occasionally to get into a store, and that required braving the debilitating heat wave of Arizona in August. Actually, I didn't mind running all these errands, I wanted to do flowers and the guest quilt and braid deep into the night. I was a year behind on Noe-tiff bonding time, after all.

The wedding was beautiful, the reception was simple and elegant, Noe looked as gorgeous as brides come, she performed a couple beautiful hula dances, Mark played some cute, romantic ballads on the guitar, and their first dance was a salsa! Yes, it was above and beyond THE hottest first dance--and she did it in her wedding dress, bustle and all. Be very impressed.

Well, I remember that once the reception began, I had a good spot of free time (which felt so weird, because the only kind of weddings I've ever been involved in executing before were not at country clubs with paid staff, but at free venues with lots of family and friends semi-voluntarily enlisted to keep things running smoothly, although inevitably no one usually seems to know who's in charge of what). So, you would think between generous servings of cheesecake I would have taken more pictures, or at least one from a clearer angle.

Me and the girls did create those bouquets, although if anyone deserves the credit, it's the florist. Upon our arrival to purchase the flowers, she began giving us arranging advice that turned into a flower design fest, and she basically did all the designing herself. I don't pretend to be anything but the humblest of amateurs, so I was indeed grateful for her professional assistance, especially since she thought all of my arranging plans were tacky and old-fashioned-- I'm glad she spared me the pain of shaming the entire wedding party. 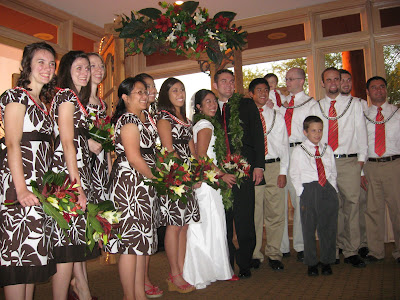 Oh yes, but I did make the time to capture this priceless cake, which happens to be, aside from a small corner (for the photo opp), frosting slathered over cardboard boxes. Not bad, eh? Who actually eats the bride and groom's cake after filling up on the entrees and goodies, anyway? 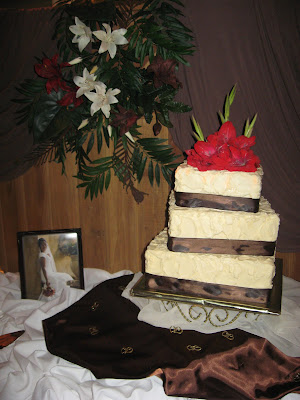 The only other memory I photographically captured was Mish and JJ's commendable work on Noe and Mark's honeymoon ride. Of course, the car is the best man and groomsmen's responsibility, but I learned long ago that no best man or groomsman seems to be aware of this until the reception is half over, so I took it upon myself... to delegate the task to Mish and JJ, who could only locate a gas station mart for securing supplies, but thanks to the stifling heat, the tortillas and cookies melted beautifully onto the windows and hood. 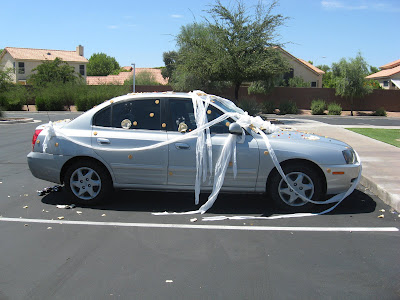 Okay, so I understand why Mark and Noe weren't thrilled about the celebratory decor, but we totally had to miss out on the sentimental part of the luncheon (and Mish and JJ on first choice of lunch meat) in order to create the effect. No but seriously, there was no formal bidding of farewell with bubbles or birdseed, and so I dragged to couple out the door and, despite how this picture appears, they looked pretty peeved. But I think their newlywed glow glossed over any initial resentment. 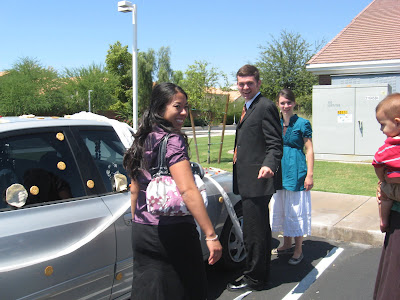 It was a beautiful wedding and I was so grateful to have been there, and that I only had to keep track of one tired toddler during the festivities. I got to top off the visit with a couple days in southern Arizona with college roomie bff Michelle and her adorable family.

Amazingly, I didn't take a single picture during our stay, and I'm positive that I had enough free moments to do so, but rest assured that the visit was relaxing, reminiscent, and really confirmed our status as bosom friends forever. Michelle is my only close friend who was also crazy/awesome enough to get married really young and want to have kids right away, so we understand each other quite well, but I guess we've been doing that since long before we had kids.

The next leg of the vacation anthology takes us, well first to the Phoenix airport, where Kyle and Ellie's flight conveniently happened to layover, and then as a reunited clan on to Minnesota for nothing but non-stop family fun with the Larsens.

You mean someone actually braided facing the wrong way? Man, that would suck.
You have such a lovely writing style, Tiff. Your sentences are constructed so seamlessly that I end up reading and rereading them in an attempt to impress my own mind with the methods of how one conveys sentiments so eloquently. Take that last run-on sentence, for example. Keep up the good work!

It was so great to have you here! The wedding pictures are lovely. Next time I have an event that needs a florist - you're my girl.

I have to comment on the box-cake. We had three receptions all over the country and didn't want to redo the cake every time, so we also had a cake made of frosted cardboard boxes. It was that hard-as-rock egg white frosting too, very durable. We just cooked a tiny tiny square of actual cake each time for the top layer for us to "cut" at the receptions.
OK, the end of the story is that we put the cake in the garbage when we were done with it, and happened to be home when the garbage truck came. It was hilarious to see the garbage guys figure out that the cake wasn't real and then toss it around for a couple minutes. Anyway, glad your craftiness paid off, you really have a gift for those pretty, girly things that make the wedding.
(Posted by K)

Mish, you are too kind, and yes, I am indeed the reigning champion of run-ons, so congrats to anyone who can follow my gist without re-reading.

I'm glad the flowers and cake worked out well, and seriously I should decorate wedding cakes, too. The hardest part is keeping the cake from cracking and not getting crumbs into the frosting. Cardboard box cakes are brilliant!