This is not boasting. This is an important record-- because I'll need to hear this while we go through her tumultuous teenage years.

An email from Ellie's nursery leader (takes care of two and three-year-olds at church) to my mom:

"Anna,
Your grandaughter Elle is in my nursery class, and she is adorable. She is a great toddler, of the 15 kids we have, she is definitely one of the very best behaved. She is smart, cute and never a problem. I am sure you are really enjoying having her in your home. If we had 14 more of her, the nursery would be a breeze!
[Linda]"

Some of you, namely those who witnessed Ellie's ferocious tantrums and constant whining that persisted during our entire year in China, may be surprised to hear this rave review. Yes, her behavioral transformation was abrupt, but not explained by a change in locale. Rather, she was just tired. Cliche, I know, and we didn't really believe it either as we sought to excuse her cranky behavior in front of friends, family, and complete strangers. (Even Didi's screaming fits became somewhat routine as he got older.)

The revelation came via my college bff Michelle, who read a great book about giving kids the opportunity to sleep as long as they need. Putting my kids to bed at 6pm sounded a little absurd, but the basic idea is that kids can't regulate as well as adults can, so they need a schedule that provides plenty of time for sleep. For instance, if you or I go to bed very late one night, we can compensate by sleeping in or taking a nap the next day. Kids can't do that. Instead, they accumulate sleep deprivation and the tantrums become routine.

I'm embarrassed to say, but the reason I've kept Ellie up until my bed time since her infancy is because I thought that would make her sleep in longer, allowing me to sleep in longer. On the contrary, Michelle found that her kids woke up at 6am whether they went to bed at 10pm or 6pm, but they were happier and better behaved if they went to bed early. I tried it, and it works. To think, all this time putting my kids to bed earlier would not make them wake up earlier! Like Michelle said, it's not logical, it's biological.

My kids were never total nightmares, but they did seem to be cranky a lot and would wake up showing signs of tiredness often, I think because they awoke with the sun, regardless of their bedtime. Now they go to bed between 7:30 and 8:30 (instead of 10 or 10:30pm), wake up at 7am, and sleep for two hours in the afternoon, which not only means they are healthier, happier, and Ellie's undereye circles are more lavender than black, but also that Kyle and I get to enjoy a book or movie together every evening. It sure amazes me how I am ultimately the cause of every problem I have with parenting my kids. 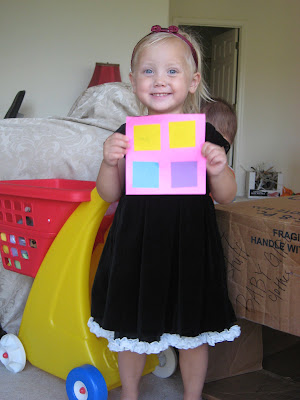 Showing off some nursery-made artwork 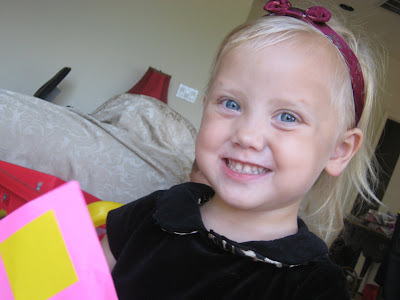 I've taught you well, young one. I'm so glad it's working out for you guys. I only wish I'd known about it for the first year and a half of Kimberley's life, I think we could have avoided lots of tantrums. YAY for well-rested babies!