Like many of you know, I returned to Cambodia for a month-long research project in May 2005. Here are some pictures and stories from that trip:


Monsoon downpours sometimes come in a matter of seconds on mainland SE Asia. Luckily, these people found a tarp in the truck. 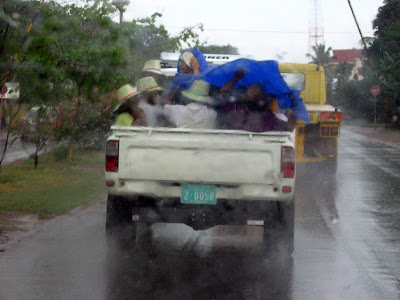 The picture below is such a classic Cambodia scene. The sign clearly explains in both Cambodian and Vietnamese that: littering is strictly prohibited.

Looking at this picture today, I was reminded of a time I ate a beautiful pineapple slice on a stick. Needing a place to discard my waste, I asked somebody where the trash can was--and without saying a word, he sternly pointed to the ground. Something must have gotten lost in translation because I saw a ton of trash, but not even a single can. (That pun's for you, Unky B.) 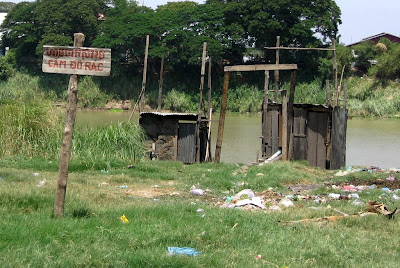 I don't think I've ever seen such beautiful blue skies with picturesque puffs of white clouds as those in Cambodian summers, like the one below. Though my cheap digital camera hardly captures its beauty, I felt like some hack photoshopped the world around me to be so perfect. I awoke from my daydream by tripping on a heap of trash. Oh the irony. 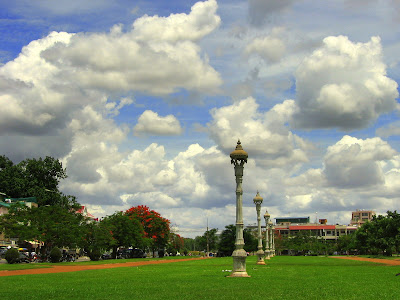 Can you tell which cloud carries the monsoon rains, below? As soon I spotted that beast, I headed for the safety of my home because clouds of this color are quick and unforgiving, and will consume you in a matter of nano-seconds. I don't know what I was thinking, though. It's like trying to escape the grasp of a crocodile, mid-death roll. Just give up man and enjoy the ride as long as you can. 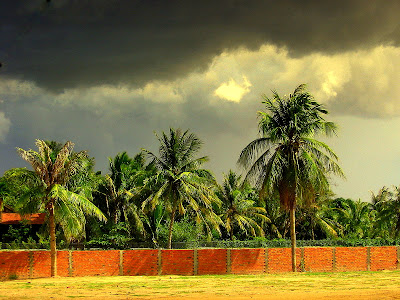 This panorama is of the Tonle Sap river taken from the Cambodia-Japanese Friendship Bridge. If you look carefully in the distance, you can see where it meets up with the Mekong River. The Tonle Sap is the only river that changes directions twice a year. Huh? During the rainy season, the Mekong's capacity is so high that it actually pushes the Tonle Sap river upstream, changing its direction. As the rains stop, the river resumes its natural progression towards the sea, until the cycle starts all over again the next year. Pretty amazing, huh!

On another note, the bridge itself is the nemesis of any one-speed bike rider. There was a time that I had to pedal as fast as my chicken legs would go to get DOWN this unmerciful bridge (usually the redeeming part). The rainy seasonal winds over the river were so strong that had I not pedaled, I would have been blown backwards, I kid you not. Something is not right about this bridge.

This is the outer fence to the Toul Sleng Genocide Museum. Under the Khmer Rouge regime, this former school was turned into a torture/ interrogation prison where thousands of men, women, and children suffered humiliating deaths. Back in 2002, I lived about 2 blocks from this place and got the heebie jeebies every time I rode past it. 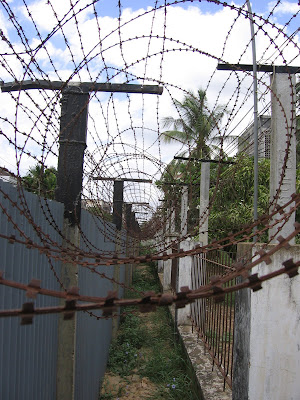 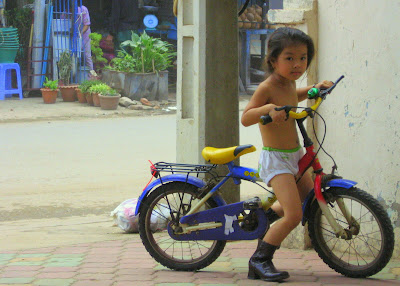 This is a propaganda billboard in Ho Chi Minh City, Vietnam, that celebrates the 30 anniversary of the Fall of Saigon (or the Liberation of Saigon, depending on who you ask). The caption says, "A nation to the utmost joy." Notice the doves flying towards the heart-shaped VN flag. Even the flowers can't contain the joy their country has, and as a result, they spontaneously spit petals out just to beautify the land. Now that's nationalism! 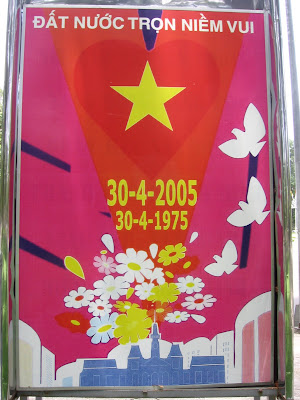 This picture has a story. After eating some yummy bún bò Huế off the street, my Vietnamese Dad took me on a day trip to Phan Thiết, about two hours by moped from his house. The spicy soup churned in my stomach with every bounce on the pavement, and eventually decided to fight back. I asked Dad to pull over, where I stumbled off the moped, and threw-up in an inebriated fashion. I approached the laughing bystanders in this food stall, asked for some water, and talked with them for some time. I don't know if they were more surprised that the foreigner spoke Vietnamese, or embarrassed that the foreigner understood what they initially said about me (they assumed I was drunk, of course, among other things). We all had a good laugh. 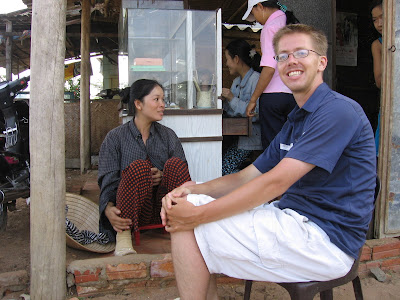 This area of Đồng Nai province was a major Viet Cong stronghold during the war, and visiting these fields made the war more vivid and real than I had ever known. I couldn't stop the Jimi Hendrix songs from eccoing in my mind as I tried to imagine what our troops suffered in these fields--probably this very one. 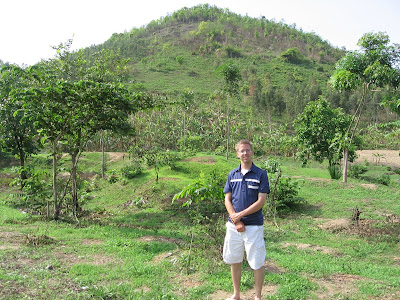 A wonderful family let me stay with them for the duration of my Cambodia stay. I feel so grateful to them because they helped me escape feelings of loneliness being away from Tiffany. In the evenings, I would watch the Cartoon Network with the kids and help them with their English; they sometimes even slept on the floor in my room to keep me company (actually, to make use of the air conditioner, but it made me feel good nonetheless). Sometimes, Sina would call for a dance party:


Here are some of the wonderful people who made my trip extra memorable: 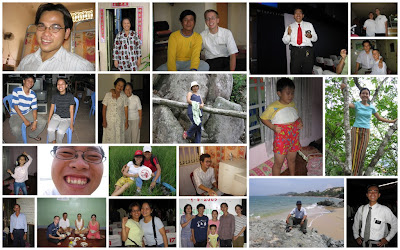 Wow! Your dancing is as good as Napoleon Dynamite's! (And I mean that in a very good way.)

What wonderful adventures you had! I'm so glad you were able to go and that I was able to sleep with your pregnant wife and unborn first child while you were off exploring the world. You failed to mentioned what I'm sure was the highlight of the trip, ariving at the SLC airport to signs, balloons, and a Kuzco cake!