Happy Birthday to Me!

Tiffany has done it--I once again had the happiest birthday of them all. 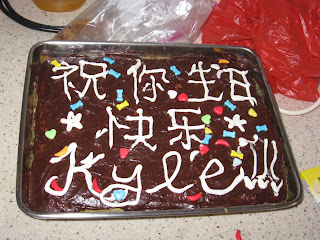 Here is a list of my surprises and gifts of the day:

-It started with Tiffany waking-up early to spend time with me before work. (I'm usually forced to kiss her cute morning face just before going to work. Because I am lucky if I get as much as a 'grunt of acknowledgment' before my departure, you can imagine how thrilled I was when she woke-up just to be with me.)

-At school, Tiffany surprised me again with a visit to class, offering homemade cookies and foreign babies to appease the masses. She also made a Happy Birthday dunce cap that I was forced to wear, while they sang to me. Afterwards, she took me out to eat yummy Kung Pao Chicken and Fried Tofu at the restaurant across the street from school that I frequent.

-After lunch, a student from my friend's class came halfway through the period to retrieve his textbook from his homeroom desk. Now, when a student interrupts my class like this, we only let him get his stuff if he sings an embarrassing song or dance (now before you judge me, creative discipline is common and expected at our school-- it usually involves push-ups, holding a chair over your head until your arms shake, or any form of good ol' fashioned embarrassment). This 17-year-old student is a repeat offender; the previous day, we had him sing the ABC song and passionately play the air guitar. When I asked him what song he would sing today for our class, he treated me to an enthralling--and heavily accented--rendition of 'Happy Birthday.' Nathan, his teacher, suggested it as an appropriate tune.

-After work, in a rush to visit some friends for dinner (she told me of the casual dinner days ago with an accompanying logical explanation and apology why it wasn't a birthday dinner... which shows how good of a liar... hmmm, I mean jokester... she can be when there is something good to be hidden). I started getting suspicious, though, when Ellie told me "There's a BIRTHDAY CAKE!" I asked Tiffany if this was true, and she said yes, "...but we have to make it when we get home. Sorry." Ellie was quick to correct her lying mother and said, "There's a BIRTHDAY CAKE in David's car."
"Oh, really," I said.
"Please, tell me more."
Tiffany started laughing hysterically saying "I don't know what you're talking about, Ellie--what a creative imagination our little daughter has!" At the restaurant there was a party of good friends and delicious food. 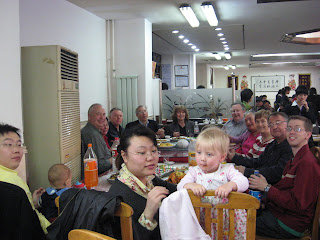 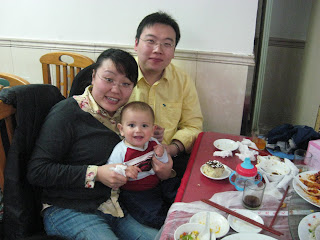 -We got to eat the cake with chopsticks; no forks at this restaurant. 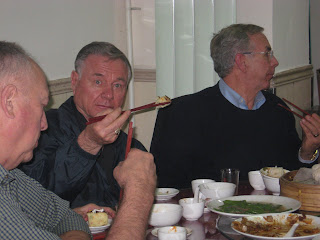 -Later, some of our friends watched the kids while we went to see a movie at Nankai University, I think the movie was called 'Dreamer' ...it was about an injured race horse and a father and a daughter (which I liked because I am a father to a daughter.)

-As for gifts, Tiffany bought me a lovely heart-shaped alarm clock, Ellie bought me a hamburger timer (a plastic timer shaped like a hamburger), and Tiffany's family sent a great book I have been wanting to read called "The Mormon Way of Doing Business," which talks about how to balance your life as an LDS businessman. -Can't find that one in China! Thanks everyone!

-To top off the night of fun, Didi pulled out his charming present. He had also been secretly planning a gift for some time, just like mommy; he began to take his first steps on my birthday! We have been trying to entice him the past while, but he was completely uninterested. We thought he was too fat and out-of-shape, but he was only being lazy like his older sister was at his age.

What a memorable birthday it has been.

Happy Birfday Kyle! All this time we thought you were already 27...thanks for posting the video of Didi walking. It's great to see and hear you guys. Everyone sounded very happy. I'm sad we missed the birthday celebration.

Happy Birthday from us too...we thought of you (or at least I did, since I'm the one with the master calendar where birthdays are marked). I'm glad didi gave you such a great present, too, and one we could all share.

Kyle, I love it when you write! I'm glad your birthday was full of so many memorable awesome things. No morning acknowledgment grunts for you!

What a wonderful thing to have a video of Eric's first steps. He is growing so fast and he is very handsome. Since he looks like his mom, no doubt he would be beautiful. It looks like life is treating you good and that all is well. Thanks for blogging.

Looks like you had a great birthday!! That cake looks delish.