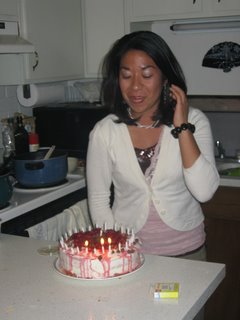 She's done it! Noelani successfully became one year older than me in a single day. We wanted to take her to play laser tag, but she wanted to play "Pit" instead... For those of you who may not know what Pit is, it is an extremely competitive game where the players trade cards and eventually lose their voice after yelling strategic numbers. Unfortunately, last night, I (Kyle) was the only one who lost my voice because then it was easy for everyone to ignore me like normal (my voice isn't back yet and I'm still being ignored). She also decided that soon she would throw a Willow party and today I collected some acorns for the acorn toss game. Overall, it was a fun evening.