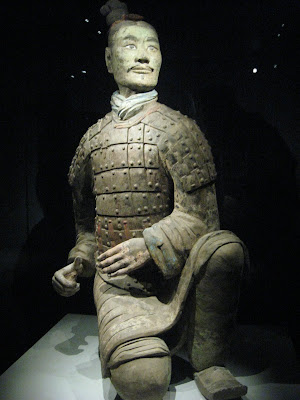 In one last huzzah before returning to work, Tiffany and I ventured 12 hours to historical Xi'an, the ancient capitol of China for 6 major dynasties. The trip was only possible because our dear friends Chris and Emily wanted to watch Ellie for a few days, bless them, so we could travel more easily and comfortably. After arriving via first class train, we were first greeted by this guy: 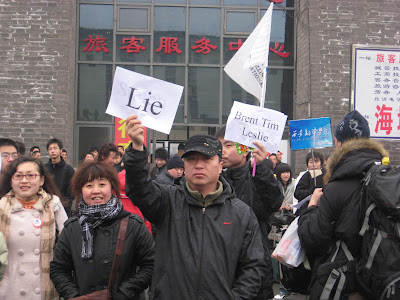 Was he saying the Terracotta Warrior story was fabricated? Was he making defiant accusations about the current political system? Was he sharing his opinion about the rumors of a New Kids on the Block reunion tour? Sorry bud, the tour is confirmed.

Tiffany and I later determined that he was probably offering a practical solution to the natural disadvantages we white-skinned tourists suffer from. "When in Rome...," right? We mentally declined to stoop down to that level because it would only justify their deceitful actions, perpetuating the problem. It was at our first destination that we were reminded of the nature of tourist-trap Chinese businesses, in a hole-in-the-wall restaurant near the Terracotta Warriors--

Me: Do you have any napkins? (noticing a stack of them next to the cash register)
Waitress: Oh... yeah... Let me get some for you. [she proceeds to hand over a package of nice unopened wet wipes.]
Me: Oh... Are you going to charge me for these?
Waitress: Umm... yes.
Me: Hmm... Can I just use some of these napkins right here? (pointing to the stack next to her)
Waitress: No.
Me: Why not?
(...awkward silence...)
Waitress: Okay. You can use those ones.
Me: Okay.

After the napkin incident, I began to feel anxious about our bill; but no worries, it was a small breakfast in a frigidly dark restaurant:

Me: Check please!
Waitress: (she writes down the breakdown of our mediocre meal and hands me the receipt)
Me: This costs too much.
Waitress: No it doesn't.
Me: I have never paid this much for these dishes before.
(...another awkward silence...)
Waitress: Wait a minute...
Waitress #2: What seems to be the problem?
Me: I want to see your menu.
Waitress #2: (enthusiastically justifies the exorbitant prices in a "foreigners menu" that we had never seen)
Me: I want to see the Chinese menu.
(...extended awkward silence...)
Waitress #2: Okay. (She subtracted 30 RMB from each dish! To put it in context, our total bill eating such meals at such restaurants is usually around 30 RMB.)
Me: [grudgingly hand over my hard-earned cash]
Waitress #1 and #2: Thanks for coming! Come back again! (making playful faces at Didi) He is so cute!!!

Had they seen the guy at the railway station before us, or was it their own deceitful plan? Regardless of the scam's dubious origins, we got sucked into their trap. We entered the restaurant as mere tourists and left as true American heroes, wielding the sword of "sticking it to the man." 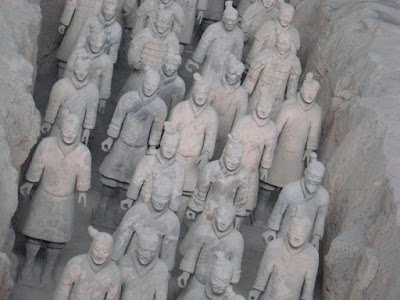 After breakfast, we marched ourselves into Qin Shihuang's Terracotta warrior site. This is one of the most famous archaeological finds in the last century, and for good reason. His massive unearthed army carefully guards his unopened tomb and was virtually unknown until several farmers dug into them in 1974. Since then, the site has become a UNESCO World Heritage Site. 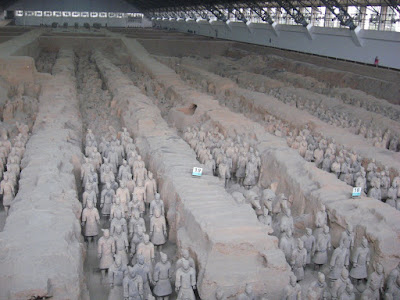 The warriors themselves are life size and completely individualized--no two are alike. It makes you wonder who they were modeled after: were they actual soldiers in his army? Or did the workers design them after themselves? 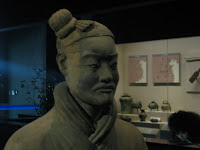 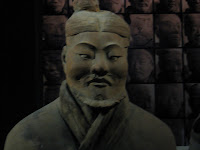 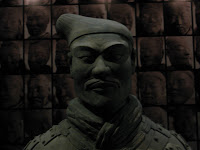 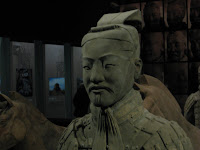 Qin Shihuang was the first emperor of the Qin Dynasty and is responsible for unifying China in 221BCE. (Many scholars believe the word for "China" in English and other foreign languages derives from his name, too.) If you have seen the Zhang Yimou film Hero, Qin Shihuang is the stoic emperor in this international blockbuster. Though I've heard Zhang Yimou makes some costuming blunders and other historical errors, the film portrays a sense of the enormity and encompassing power of his army. 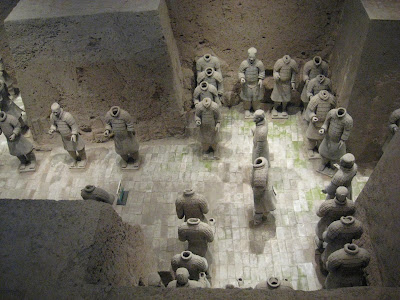 The emperor's actual tomb has not been excavated yet, if it ever will be; I guess there is some controversy about it (though it's a no-brainer to me). Supposedly, the government is waiting until excavation technology is improved, in order to better preserve the artifacts. According to the Han Dynasty historian Sima Qian (who detailed the tomb in his writings), there are crossbows cocked and ready to shoot anyone who enters. Inside the tomb there are jewels, gold, pearls embedded on the ceiling to copy the stars, and other valuable artifacts strewn about. One of the biggest excavation feats to overcome is the high levels of mercury in the soil--he had silver rivers flowing within the tomb itself, mentioned by Sima Qian and that modern remote sensing technology confirms. In my tomb, I want thick rivers of moist avocado paste--to keep my skin fresh.
-What will your rivers be made of?

I loved reading this post! Brian and I considered a trip to Xi'an on the train before we came home. But, then, we bagged the whole idea because we were planning to take all three kids with us and we were just too nervous about the possibilities of a bad hotel and not knowing what to expect from the train, etc. How was your experience in those regards? Do you think you could have done it with Ellie? Or, maybe I should ask, do you think you would have wanted to do it with more kids? I've always wondered if we should have just gone for it. Seems like an awesome trip.

That is probably one of the coolest things ever. Blaine has partially experienced it (okay, not really) because he saw a few of the warriors when they were on display at BYU many years ago. And my rivers would be made of Nutella. No brainer.

way to stick it!

You guys are awesome!

That was a great post.
I have to say though that it's hard on the eyes to read white text on green.