Near the end of February, Ellie's not-so-gentle prodding finally softened us to tackle a trip to the Tianjin Zoo. I didn't even know Tianjin had a zoo, but according to some website, they breed hippos there to be sent off to other prisons/zoos--and hey!--they have a panda, and who doesn't love a cuddly little panda bear?

Still, I was hesitant. Ever since the miserable, molting polar bear of 2004 (during our visit with my sister Christie to the Denver Zoo), well, my sensitive little soul just can't enjoy gawking at isolated, poorly-treated animals and calling it recreation. I'd heard about zoos in Asia, so I was also just as worried about our safety as the condition of the animals (that San Francisco Zoo tiger escape last year shook me up for several weeks, including in my dreams...).

Alas, the lack of exciting alternatives, coupled with some mild curiosity and Ellie's unabated enthusiasm, finally landed us in front of a large park sign on which half of the animals illustrated were not even represented within the park. Oh well. Okay, this intro is getting drawn out as if there's some thrilling twist in the plot. But there's not, so I'll just enumerate a few of our visit's highlights, or rather, how the Tianjin Zoo experience differed from that of American zoos:

-You have to pay extra to see any of the animals worth seeing. For instance, to see common snakes and frogs, it costs you 15 yuan. Kyle exclaimed, "If they really do have a panda, I'd pay...hmmm...even 20 yuan to see it!" (And we all know that's a big deal for Kyle.) Well, he lucked out because the highly endangered species was on display for only 1 yuan! (That's about 15 cents.) But apparently every yuan counts because the booth guy chased us down to get an extra yuan for Ellie's entrance fee. Kyle began to dispute him since we've never paid fees for Ellie anywhere in China--buses, parks, museums, etc., but then he realized we were still getting a good deal since he was willing to pay 20 yuan a minute before. 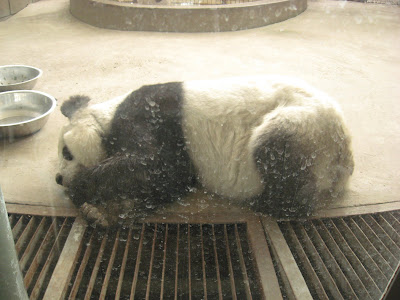 -Aside from looking a little lonely and perhaps cold, the panda seemed to be in decent health and condition. A little punier than we expected, but still worth the price. =) 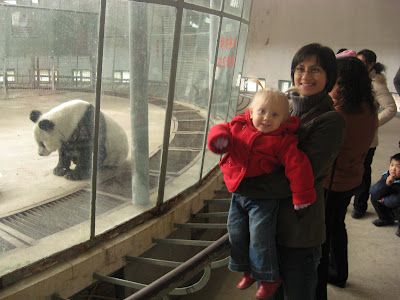 -The tiger exhibit also required an extra fee, but why they expect people to pay to enter these terrifying jaws... need I remind you of the San Francisco Zoo incident of Dec. 2007? I don't think Ellie was the first kid to run screaming from this exhibit entrance... 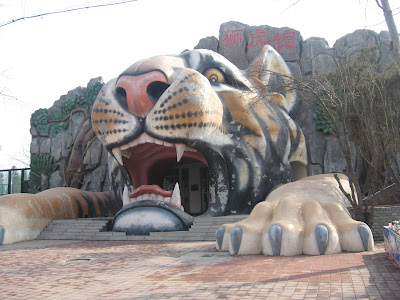 -Thankfully, there was a much less intimidating back entrance (free of charge) that afforded us a viewing opportunity of no less than FOUR tigers! (I guess they grow them here in Asia or something.) 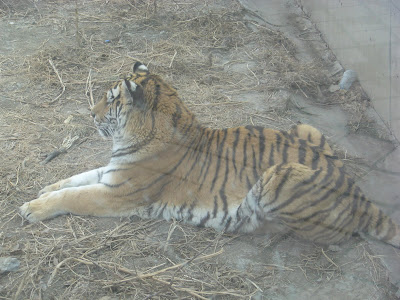 -We'd read about some exploitive circus show involving bicycling bear cubs, so we avoided all tent-like structures, but then we discovered that all the zoo's bears are performers! This one would stand up and dance or roll around on his back to merit baozi (meat-filled buns), crackers, Mandarin oranges, candy, etc. tossed down from snack-laden passers-by. I guess my accent was too thick because he didn't respond to my Chinese commands. Actually, I don't think I was holding any food. Even in the absence of restrictive zoo rules, something in my code of ethics was holding me back... 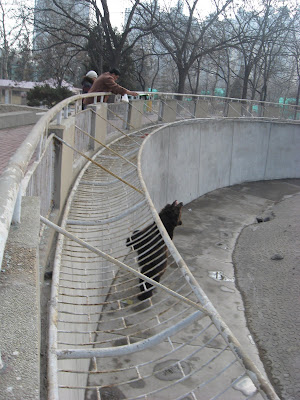 -These playful little cuties also begged for snacks from visitors by clasping their hands together while repeatedly bowing their heads on the cue word "xie xie," which means "thank you." I think if you've seen the way many Asians express gratitude in this way, you'd've been mighty impressed by the bears' accurate impersonation. As entertaining as this was, what I really wanted was to see the bears in action on their playground swing set. I'd toss my oranges overboard to see that. 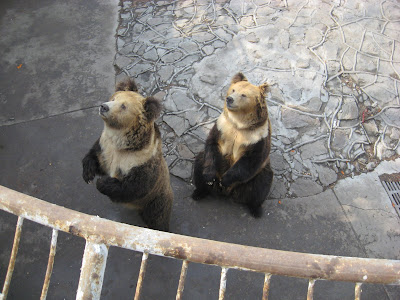 -There were even some caged animals that also ran free on the zoo grounds. Of course, they came from the exhibit of house cats, but that didn't stop two middle-aged men from persecuting free-range cats with pebbles and sticks. Get a life, bozos. Anyway, we did our rounds of the zoo and almost missed this quintessential wildlife scene, which was probably my favorite exhibit. We did some hearty belly-laughing over this one. 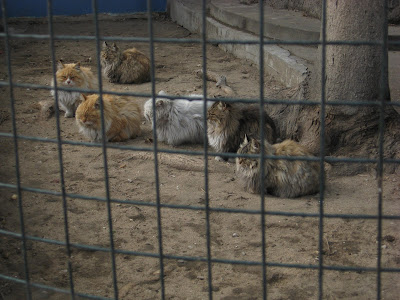 -What was most perplexing about the house cat exhibit, though, was that their cage was mighty larger and more interesting than the leopard's. This leopard looked at me with eyes that begged, "Free me. You've visited the African savanna and you know how I'm supposed to live." Oh, the guilt. 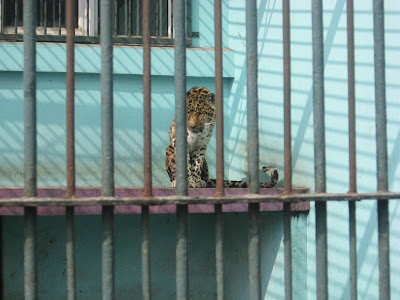 -I had an equally difficult time witnessing the chimpanzees (remember that they are not only endangered, but very intelligent), who are highly social creatures, resorting to banging their heads on walls for entertainment and eating paint chips in their solo cages. I was so affected by that scene that Kyle wouldn't let me see the polar bear exhibit.

-On an up note, the baboon could really do the moonwalk! I mean, he was good, though a little mechanical--obviously reliving the glory days when he starred in the zoo's circus show, before that baby bear took over.

-There was another monkey exhibit (that we were too cheap to visit) in which visitors can just run amok with the monkeys on a fenced-in island. I think that would've been just a little too much fun for us. 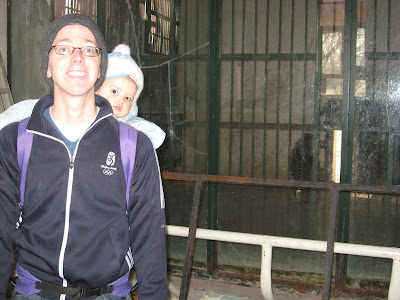 So, that's the Tianjin Zoo for you. Of course Ellie loved everything, and I probably spent equal amounts of time laughing and crying (in my heart). When I chose not to internalize what I saw, I was able to enjoy the family experience. Would I go again? Probably not, but you look into those glee-filled eyes and tell me if you could deny them their heart's desire to "see ammals atta zooooo!" 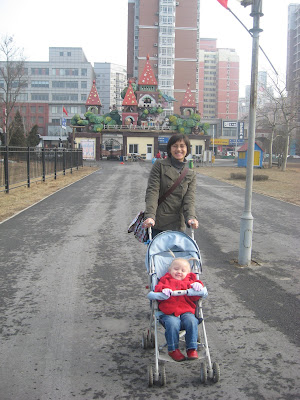 What fun! The housecats were hilarious. Do people in China not keep them as pets at all? We're going to the zoo this weekend. It's almost like we're going together, right?

Pandas, yay!
In the wake of that heinous tiger attack, I had forgotten all about the molting polar bear. Incidentally, a tiger recently escaped from his cage at the Honolulu Zoo, due to a momentary "lapse" by a zoo worker. Luckily, he wandered into another big cat exhibit. Scary zoo times we live in...

I love Ellie's pigtails!
Also, while I was not present for the molting polar bear incident of 04, Christie - doesn't this remind you of the molting sea lion of 07 at Sea Life Park?
And Tiff, I had a similar shock at the Hogle Zoo the other day when witnessing the alarmingly anthropomorphic gorillas. It was like starring at myself across the glass, except hairier. Scary zoo times indeed.

I can't believe you didn't frolic with the monkeys!

Egad, Meh! I had forgotten about that sorry little sea lion. Maybe I will try to free him/her this weekend in my spare time... :)