Sales techniques are very different here in China when compared to the way salesmen attract buyers in the states (which we sometimes miss), probably due to the relatively recent emergence of capitalism--a stark contrast to the former socialist, planned economy.

The spoils from an early shopping spree in Shanghai (we didn't have any clothes before then): 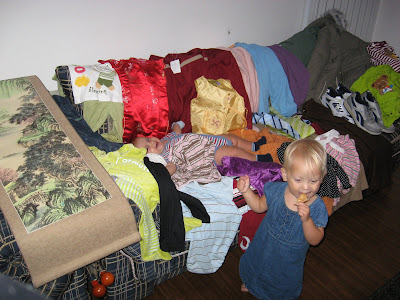 China MYTHBUSTERS- The only place you can buy fortune cookies in China is at an import store= FACT.

Here there seems to be little concern for business ethics because often salesmen will do/say anything to get your money. They often put customer satisfaction/retention at a low priority, forcing any modern American businessman to cringe with disgust. I guess it makes more sense when you put it in context of the local circumstances: in a city of 10-15 million, there's always another chump just beyond the polluted corner.

It really is no use asking for their honest opinion because the product is always incredibly awesome! It's almost like asking a mother if her baby (named Erik Larsen) is adorable-- a no-brainer. 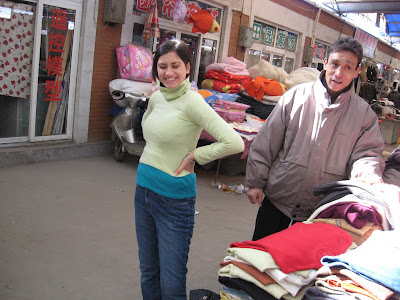 Example #1
After Tiffany tried on this obviously small sweater, this salesman held firm to his claim of it fitting perfectly even though she couldn't breathe long enough to get a second picture. In his attempt to recoup, Mr. T style, he made some comment about it being good to show a little belly. Kudos for the effort, but who wears a turtleneck sweater with a bare midrift? His face-saving tactic was particularly moot because of a common superstition here that if your flesh (particularly stomach) is exposed to the open air, the evil wind will mess up your chi. Hey man, why are you so willing to mess with my wife's chi just to make a $2 sale?

China MYTHBUSTERS: as soon as a foreigner walks into a store, the salesman's eyes turn into dollar signs= FACT.

Like in many other countries around the world, prices are not set in stone; you need to barter down to a reasonable price. The starting price is always ridiculously high (just in case you're as chumpy as you look) and then they add about 600% on that for foreigners. Here's what you can do to combat this:
Luckily, stalls with similar products are usually conveniently grouped together in a single location (shoes, baby clothes, stationary...), so, often you just go to the next seller, find the same product, and gradually work down to your desired price. The farther you get into the market, the lower the starting price, which usually results in a lower ending price, too (since they don't get as many buyers). Talking to many sellers is incredibly important to find the best price of an item; you have the advantage because they don't know how low the previous sellers offered you, and believe me that you do have to quote your best previous sales in order to get them again (eg "but I bought this same "Armani" purse last week for $5-- I know you can go lower than $45 and I'll only take it for $5"). Works like a charm.

China MYTHBUSTERS- "Made in China" products found in the US are easily found in China= MYTH (Actually, "Made in China" goods on the US market are of a much higher quality than anything "sold in China" on the Chinese market, that we have found.) 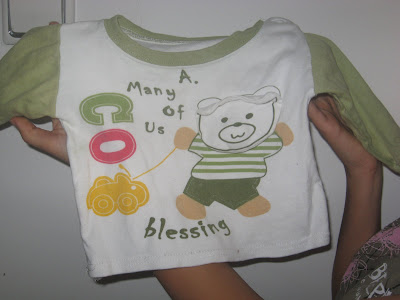 Example#2
After a long day of intense searching for cheap (and cute) clothes during our Shanghai trip in October, Tiffany found an old woman selling baby clothes, nunchucks, and cigarette lighters, a natural combination. Acting in desperation near closing time, Tiffany settled for an outfit with a ridiculous bear who had a squeaker toy hidden under the snout and some nonsense English (this is how low we were pummeled). Revealing our inexperience through hesitation, we caved in and bought the silly outfit (after demanding a nunchuck demonstration-- priceless coming from an elderly woman), but only because she had the clothes bagged up and cutely wedged into Didi's chubby little wrist rolls .

China MYTHBUSTERS- If you properly address a Chinese salesman as "comrade," he will immediately give you the product for free due to the collectivist nature of society= MYTH

Despite the inevitable challenges of making those "perfect finds," Tiff still declares bargain shopping her #1 preferred hobby, in true Goodwin style. Local Chinese markets are a worthy substitute for the yard sales she used to frequent. I can even usually tolerate shopping this way, especially to see Tiff's face light up as she gets an incredible deal on something we don't need and never would've bought for full-price anyhow. The problem is that, without any degree of organization within or among stalls, Tiff takes it upon herself to thoroughly dig through piles of potential steals. She doesn't stop at locating the right style, color, and size. No, she locates one for everyone we know who fits that size, as well as one for everyone who may someday fit that size. I really can't complain, though. Who else has a wife that buys Gucci belts only if they're priced under $2?

i remember those shopping days at kohls or NY & co. and all the great deals that you got... i guess things haven't changed much, just the fact that you're able to get name brand stuff for even less. i'm jealous.