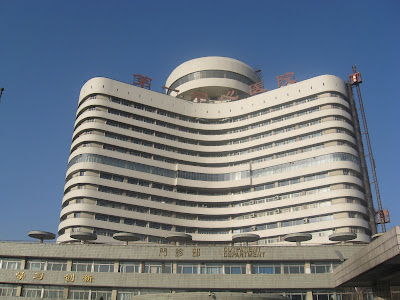 Last Saturday, I battled the unfriendly wind and traffic (on my 快车 tricycle) to the Number One Central Hospital where my liver transplant surgeon friend, Lilin, works. I guess this hospital is pretty well known for their transplant surgeries; in my friend's department, they do about 700 transplants a year, which is by far the highest number done anywhere else on the globe (that's about an average of 2 transplants every freakin day). Lilin humbly added that they are not the 'best' liver transplant hospital in the world as to quality, but their high quantity of work is due to a large number of organ donors (criminals on death row). Also, I assume it has a relatively low cost when compared to prices in the West (200,000 RMB, or just over $25,000 USD). I was initially surprised to find that such a hospital is right here in Tianjin, though, why wouldn't it be? 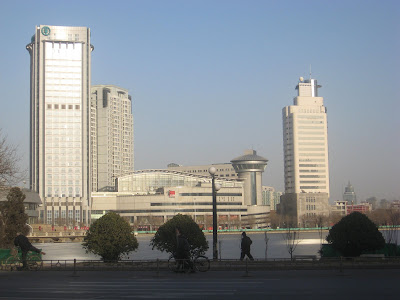 Tianjin is the 3rd largest city in China, but takes a back seat in the shadows of the cultural and political giant, Beijing. I've noticed that Tianjin has its own distinct feel differing from Beijing, maybe because there are relatively few foreigners. For this reason, it feels more like "China" to me than the capitol. City development projects seem to focus more on the building-up of much needed infrastructure to support city growth than on beautification or cleaning projects when compared to Beijing. Though it took a while to find the beauty and charm in this crowded/polluted town, Tianjin has a lot to offer foreigners (beyond sinus infections and troubled bowels), especially if you want to experience 'China' without sacrificing many familiar Western conveniences as well as minimizing contact with foreigners. (Parts of Beijing seem like a Western nation because of the diverse ex-pat community; also, so many of the native Beijing residents speak English, even when we speak Chinese to them first!)

Here are some pics I took on the way home from the hospital: 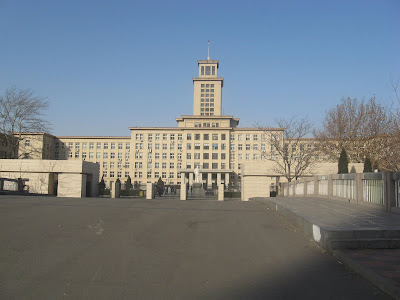 Nankai University is one of the best schools in Northern China, maybe in the "Ivy League" of China if there was such a thing. 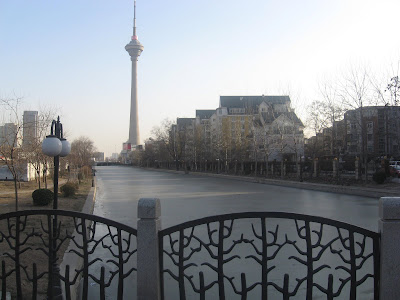 On my side of town (pollution permitting), you can almost always see the majestic (but somewhat useless) Tianjin TV Tower (everyone has cable or satellite). I hear that they will soon open ice skating around the frozen TV tower lake! 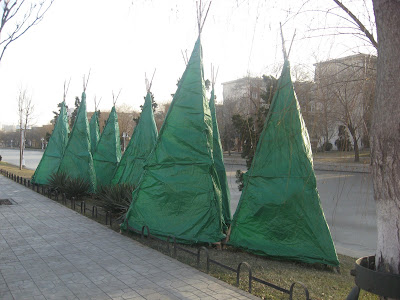 This time of year, city workers construct these picturesque tarp teepees to protect the trees from the powerful Siberian North Wind. Actually, much of the vegetation around town is covered in this beautiful green plastic. 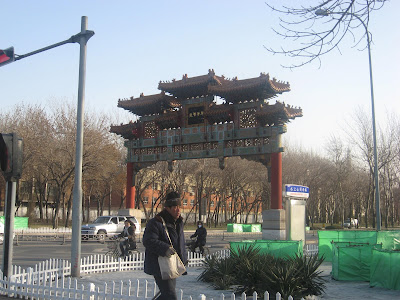 If you keep your eyes open, you will see ancient-looking architecture and sculptures that add a real Chinese charm to this modern city. It continually reminds you of the rich history found in this part of the world. 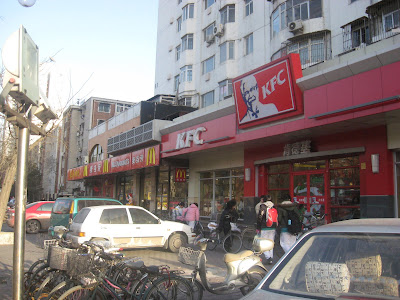 Of course, a modern city of this millennium would not be complete without the Colonel duking it out with Ronald on every corner. Urban Chinese are getting bigger than they used to be, too, maybe because of the new 快餐 (fast food) phenomenon. 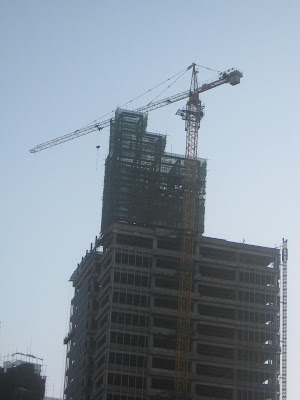 Cranes fill the skies here. While visiting Shanghai in October, we were told a statistic that China owns over 80% of the world's cranes, like the one you see above. I don't know how accurate this statistic is, but the large number of construction machinery seen every day truly shows how serious China is about quick development. When I came back from Shanghai, I started to pay attention to cranes throughout the city, and I was astonished! It's not uncommon to look down the road and see 4-5 cranes in a single lot!

I m having a difficult time communicating with the hospital. My dad has end stage liver cancer and the doctor in america is not willing to do the surgery. How would I communicate with te coordinator?

I've sent a email. You can delete your email now. I might need your help later, but as of right now they are going with a living donor and will be performing the surgery in singapore. I hope the living donor is enough, where they will take a portion of the liver. They might need a full liver.

hi, i am interested in getting a liver transplant for my mother - very grateful if you could email me. as i seem to be having trouble getting in touch with the hospital.