This past work week has been a memorable one. Thursday there were no classes because of a music/ dance festival; Friday was the annual sports day. On Saturday, we teachers attended an all-day workshop (in Korean, of course) at a hot springs resort halfway up to Beijing. Now that the week is over, I am convinced that these activities had one hidden purpose: humiliation.

Though the administration masked their embarrassing intentions with "its for the kids" rhetoric, I immediately read right through that garbage after seeing the secondary school teachers perform in Thursday's festival. Take a look:


Is this in the best interests of the students? The way I see it, it's probably one of two things. First of all, it could be the ultimate drag queen act of selflessness to lift the spirits of troubled and isolated Korean teens stuck in China. But to me, after this weekend, it appears as if the untouchable administration enjoys pushing their teachers down to the dirt; you wouldn't believe it, but they actually give monetary incentives to the most foolish-looking departments. I've come to the conclusion that it's a scheme to destroy our self-esteem. 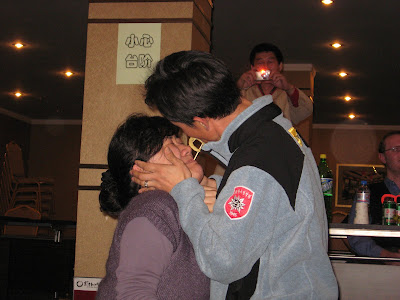 Here is a brief list from the past few days which may help prove my point (This is limited to what I personally saw or experienced):

-having a teachers lottery where the host consistently jerked back the prize as the winners reached for it; after the taunting, the host demanded a hip-hop dance (regardless of age or ability) before handing over the prize 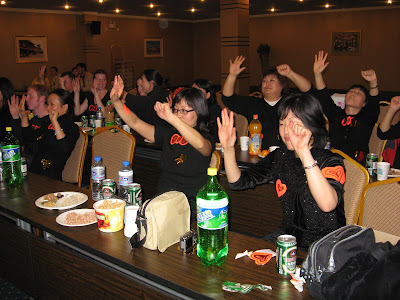 Well, I guess the yin-yang forces balance out when everyone makes a fool out of themselves, including the administration. Maybe it isn't to ruin self-esteem after all, but just a part of Korean working culture. And since I've always been the first to jump on the "I willing to look like an idiot" boat, I know I'm gonna like my time at the Korean school.