Recently Charlie's adopted an obsession with babies. This is normal for toddlers, I know, but still shocking that he was excited to see me hold my friend's baby. He squeals "beh-beh beh-beh beh-beh!" pointing emphatically at every carseat, stroller, and even the occassional two or three-year-old. So, maybe he doesn't actually know what babies are.

Still, it's pretty encouraging to see him do things like this: 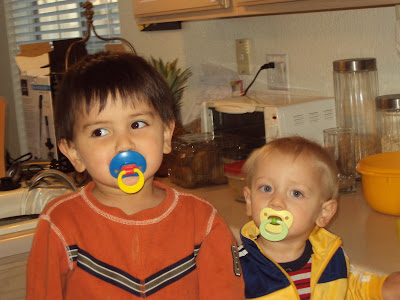 No wait. I was supposed to insert an irresistible picture of Charlie cradling a baby doll in his arms. Can't find it, but I promise it did happen!

We're pretty sure Charlie wanted to be some couple's only child. Despite being quite the attention-monger, he just never gets enough lovin. Thus, the addition of a smaller, even snugglier life form might provoke some mighty unpleasant scenes in our world. But, maybe I'm wrong. I hope I'm wrong.

Erik, on the same hand, approached Kyle the other day and suggested that he sure would like to have a baby sister! I swear I did nothing to compel him to have such feelings or utter such utterings!

Ellie has naturally been begging for a sister for some time.

All the while, I am absolutely anything but baby-hungry. I don't even really like babies. I don't swoon when I pass a cute one in a buggy. I have no desire to hold babies (perhaps because I still hold mine all day?). Nothing personal, really. I realize they're very cute and that I can respect. I'll just take a toddler over a baby any day.

It's not that I haven't loved my babies like other mamas do, of course. I just haven't enjoyed that first year of their lives as much as every. other. year. Hmmmm, perhaps circumstances explain some of this? During Ellie's first year of life I was finishing my college degree full-time. Erik's first year of life was blanketed by the hazy gray skies of Tianjin living plus post-partum depression. Charlie's first year would make any woman consider a hysterectomy. So, I'm not such a bad mom after all, right?

It doesn't matter. None of this matters because in the end, or rather, in the beginning, each child must be a baby. I will deal. Babies can't be all that bad because they do turn into children, and them I love very, very much.

Actually, even less than none of this matters. I am no Madonna or Angelina Jolie as baby hoarding is concerned, and Kyle.... let's just say that about the only way I'll be getting a baby any day soon is if that diaper I planted in the backyard really starts sprouting babies. Yeah, you better watch this sketch.

Phew!! This post sort of sounded like a round about way of announcing a pregnancy. I was nervous for you right up to the end.

Nora pronounces that sketch "horrible". (In contrast to her usual pronouncement of everything as " 'larious ".) ...I guess she doesn't know how SHE got here...