Calling all party divas (and divos?)!

I have been following the mecca-of-party-ideas blog for a while and all of the submissions are high-class and beautiful. I submitted my party months ago, before I realized the high caliber of parties that are featured on this site. And then, lo and behold, Erik's party was featured today and I am so honored and flattered and ecstatic! To relive the underwater glory of that party, click on the Creative Party Place icon on the sidebar and, if you feel like praising me, leave a comment!

I think I started a Thanksgiving craft worthy to become a family tradition. I wanted some sort of daily gratitude log that would maintain kid appeal through the whole month.

Well, not only did it maintain appeal, but it also prompted Ellie to start writing without assistance. Every day (or so) we printed an object of our gratitude on a feather and I let the kids put them where they would. I loved seeing the turkey's feathers fill out and it's always nice to have to remind myself how much I have to be thankful for.

These days I am feeling the great strain of three little ones and massive sleep deprivation to an emotionally debilitating extent, but when I actually pause to reflect on the list of good stuff I have, I am humbled and surprised by its length. 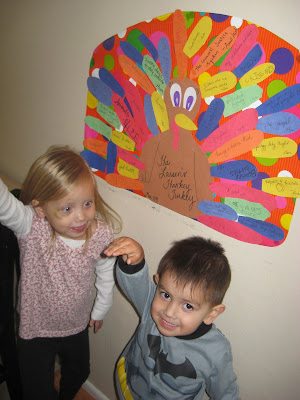 Ellie decorated feathers in her own print with things like, "gams," "mom dad," "femele," "frenss," "foot," and "crissmis." (In case you're not familiar with children's phonetics, that would be games, Mom & Dad, family, friends, food, and Christmas.

Erik dictated his blessings to be things such as, "mine brother," "superheroes," "turtles," "Bowser turtles" (actually this was his first suggestion nearly every time), "stomp," "tadpoles and friends," and "snakes that go ssssssssss when I run away."

Mish is grateful for the criminal justice system and rockin' deals on Breyers and Dreyers ice cream, Bob noted that he's grateful for sisters who are awesome cooks, Kyle is thankful for a good job and for an Ellie who unloads the silverware, and I fanned out the majority of those feathers with blessings like good music, having a live-in Mish, and pbs between the hours of 7 and 9am. 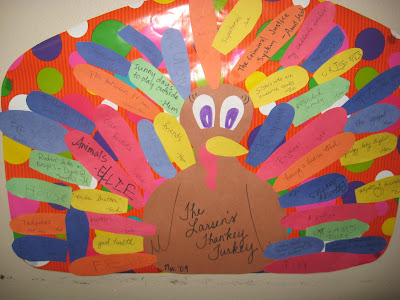 In the first week of November, we thought to take a stroll and enjoy the beautiful fall colors of the mountains. Hmmmm, that probably would have been a good idea when the beautiful fall colors of the mountains were still in season. We were too deep in the canyon by the time we realized that winter was nigh upon us, but still took a brief walk collecting pine cones for a craft that will be featured soon. Just as soon as I finish the other two thirds of it. 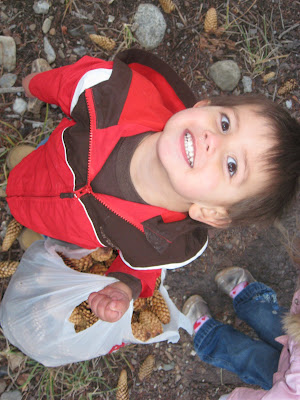 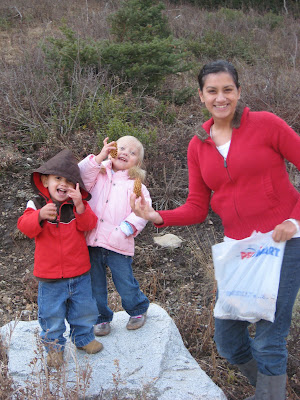 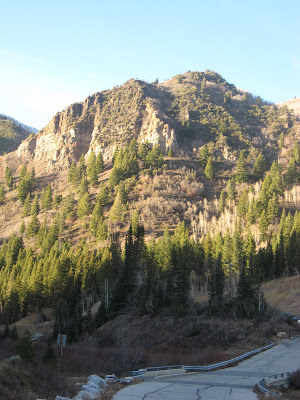 We missed the autumn hues in a natural setting, so tried to recreate it in cardboard and felt form. 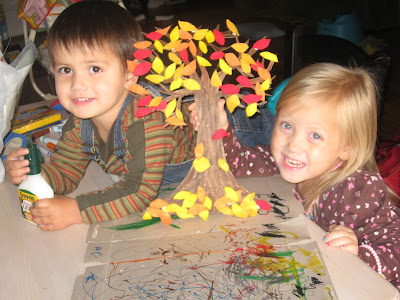 And there will be no Thanksgiving in this house without a handprint turkey craft. 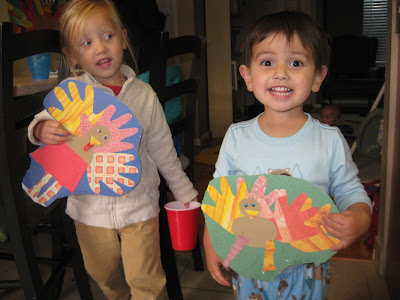 Actually there was no Thanksgiving in this house. No Thanksgiving dinner, that is. I would never whip up a feast of any proportion if Marilyn would do it for me instead. This was my fifth Thanksgiving at the Williams' and my entourage (seven of us showed up this year) has grown considerably since that first one, seven years ago. 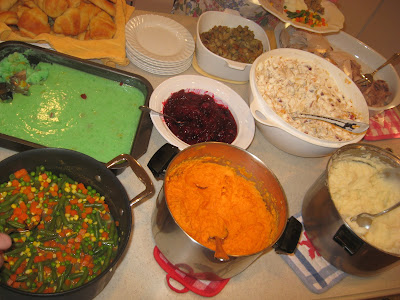 The feast was unbelievably scrumptious, as we knew it would be. Bob declared that a holiday dinner without Marilyn's crescent rolls just might make the world implode. I would echo that sentiment regarding the buttery, mashed yams. 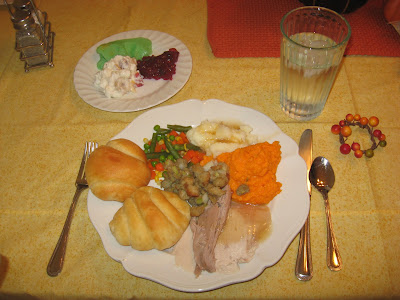 I love living in Utah, but I don't know if I will ever fully embrace this land as my home because without so many of our family members around, it can't truly feel like home. Especially now that our kids are getting old enough to recognize and remember individuals, I ache (as do the kids themselves) for them to have frequent contact with their grandparents, aunts, uncles, and cousins. Marilyn has been such a wonderful surrogate mom and grandma. I don't know how we'd be faring here without her, and not just because I would've been stuck making a turkey myself. 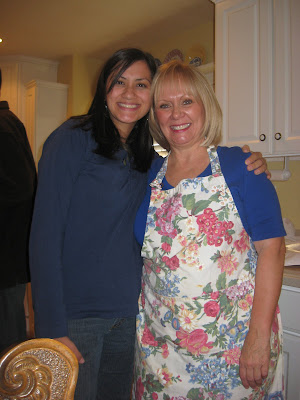 This was taken just upon Mish's first bite-- she's excited, if that grin and clasped hands didn't give it away. 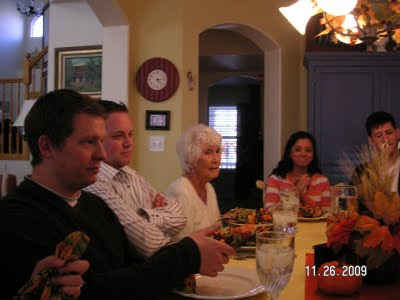 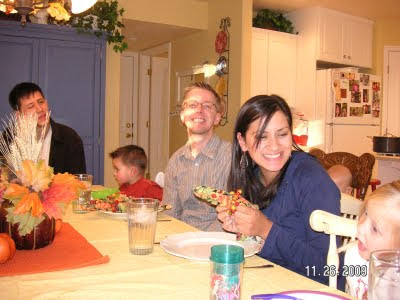 Warm, delicious, wonderful Thanksgiving. And then there was Black Friday....