Several hours worth of attempts later, inexplicably still can't upload my short video clip of the party ambiance... boo hoo. A few snapshots will have to suffice.

Kjerstin's school and the local library supplemented our Dr. Seuss collection (though we still had nowhere near all 62 of his published books) and it made for some mighty simple and cost-free decor. 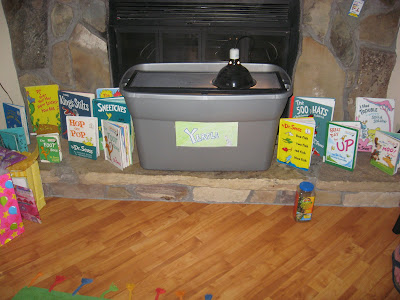 I made the birthday banner with paper scraps and the birthday bird I drew on printer papers taped together. Kjerst and I stayed up late one night coloring him in with markers. 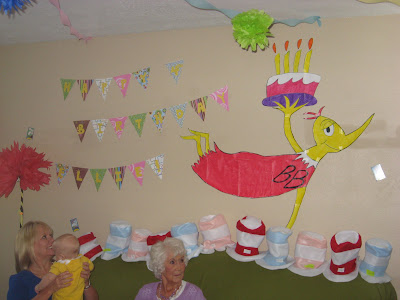 Mish made this cute sign for our newest pet, inherited via Emily as a sort of birthday gift for Ellie, although Mish was more than pleased to welcome another reptile into the family. 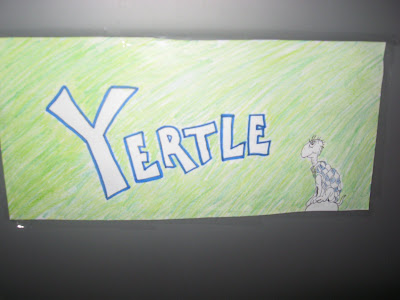 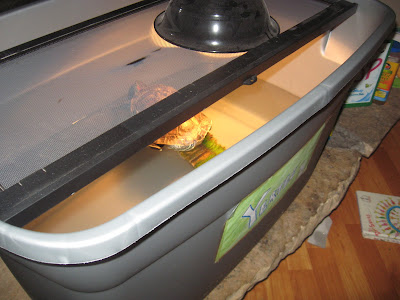 My other lucky break on party decor was a second-hand Dr. Seuss trivia game I bought at a yard sale months ago (that we've still never played), but even if we never end up playing it, it was still by golly worth the $2 for the sake of this event. I threaded all the big cards together for this garland, and we put up the tiny little book cover cards around the room. Without the game pieces, I would've still decked the room out, but the theme wouldn't have stood out much. 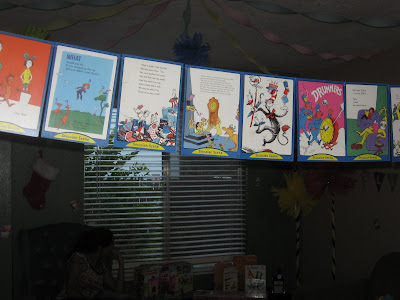 I held the party in early evening so a couple good friends could make it, but I knew this would put a damper on my children's moods (as evenings have since the cessation of afternoon naptime some months ago). Erik is especially affected by the time evening rolls around, when crankiness can escalate into one prolonged tantrum. Soooo, a couple hours before the party started, I sent Kyle off on a drive with the kids (which I figured would knock them out, as it often does). They finally succeeded, but Erik took his nap to the fullest and was out solid until halfway through Ellie's party, when Kjerstin finally went up and revived (and re-dressed) him. I don't think he was fully awake until about when the party ended. Anyway, if we hadn't done what we did, he would've been ACTING a bit too much like Thing 2 instead of just looking like him. 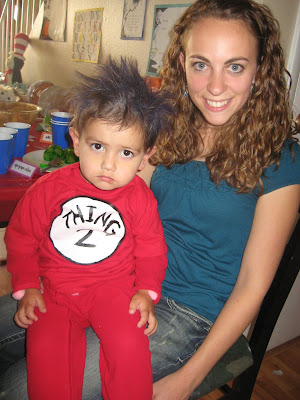 Is anybody out there considering throwing a similarly themed party? If so, don't you dare try to make Cat-in-the-hat tophats as a party favor (especially if your sewing machine breaks a week before the party). I will save you time and sanity by just assuring you it's not worth it. Actually, I could give you the dimensions that, after hours of trial-and-error, produced hats that actually fit on children's heads without swallowing them. Then it might be worth it. But only if you have a Laurisa to lend you a sewing machine and figure out a pattern with you while your six kids wreak havoc on her home, and a Kjerstin who is willing to stay up until the wee hours of the morning whipping them up with you.

And even then, you might have some kids at the party who throw screaming fits refusing to wear them, or even refusing to take them home. So maybe dollar store candy would make a better party favor (we had that, too). (And yes, outsiders attempted to dissuade me from tackling this project many times, but sometimes I refuse to take the easy/sensible way out. I think I learned my lesson. Maybe.) 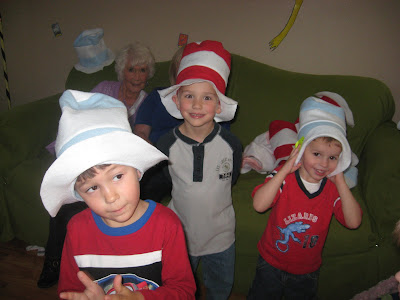 Apparently the party was not so riveting to some... 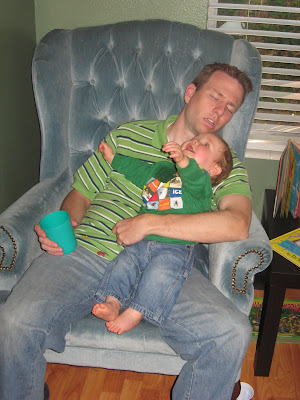 At least Rowan appreciated my hard work on those hats. (Haha, pretty pathetic if a baby is really my biggest fan.) 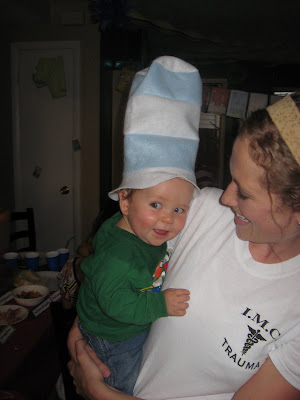 Costumes may seem a bit excessive, but I picked up the shirts/onesie for $1 each at a thrift store and painted them on in under an hour. Nothing like their Halloween costumes... 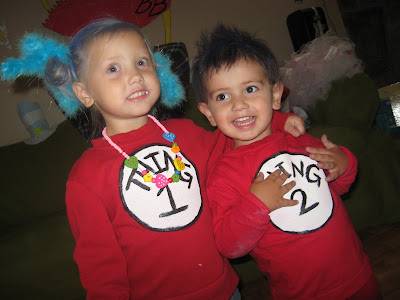 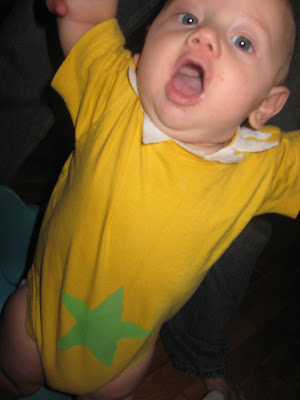 As for entertainment, we started out with an egg toss. Green eggs, of course. I made the beanbags out of felt scraps. 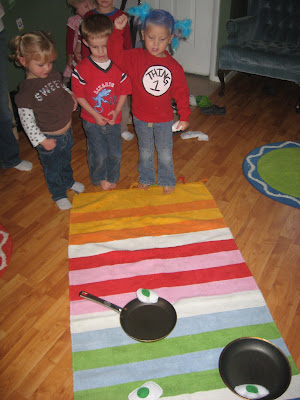 Then I read them brief excerpts from Horton Hears a Who, just to orient everyone with the look and idea of the pink clovers, and particularly of the pink clover housing the extensive community of Whos that Horton searches for fervently for hours. 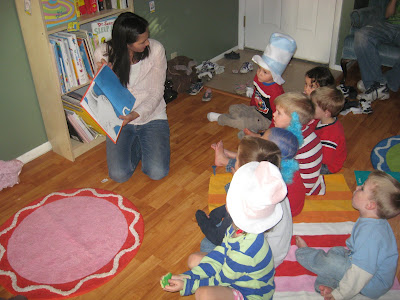 Our little Hortons searched for more like 30 seconds for the pink clovers (that we hurriedly scattered while Kyle kept the kids busy in the basement), and even though only one bore the teeny dot that was Whoville, they all found some so everyone was a winner. This was, by a long shot, our most popular game. 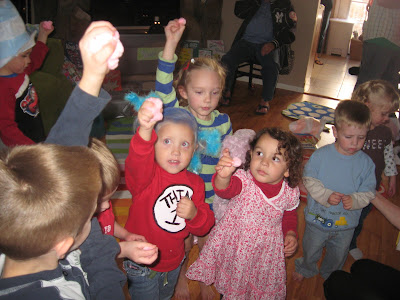 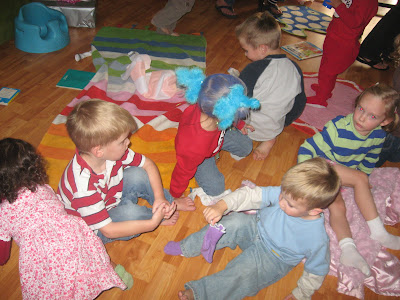 Here's the display table again. I originally wanted to color the party red, pink, and baby blue (the colors from The Cat in the Hat), but ultimately, for such a theme, no less than twenty-three colors would do. 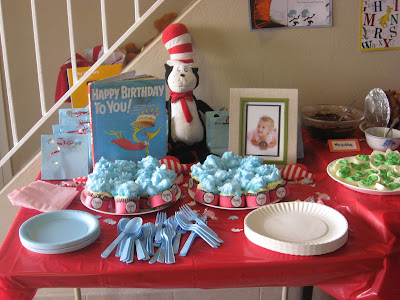 P.S. I stole the cupcake idea from Lindsey at kitchendoughdough.blogspot.com. They were my inspiration for the entire party. Before I discovered these delights, we were planning a fairy princess party. I hope more than just all of Ellie's male friends appreciate the direction we took instead. 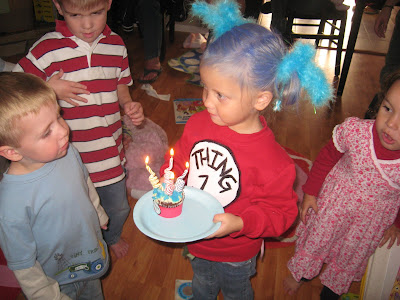 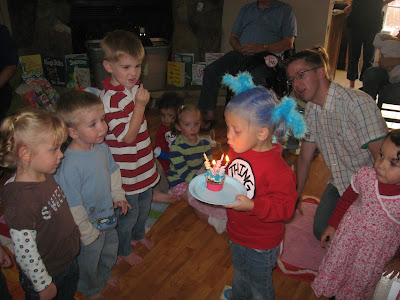 Presents! Finally! She did have to wait an extra week after all (since I postponed the party to finish the silly party favor hats I MEAN because of a family emergency), and thanks to our friends' generosity, it was well worth the wait. 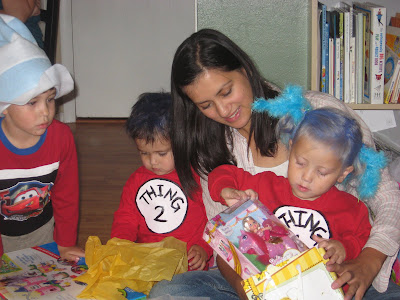 And this is about how we all felt at the end of it. Happy, sleepy, and unmotivated to undo any of the party magic we'd slaved to create. And actually I still feel like that, and that's why some of the party decorations still aren't down. 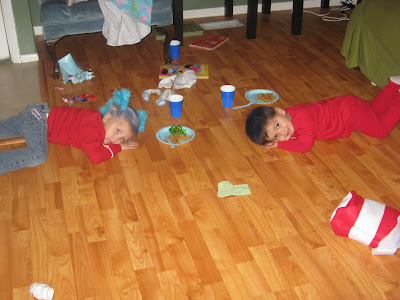 Wow T. That's impressive. I hope you never tell any of my children about this party, as I'm determined to underachieve for the rest of my life. :)

Seriously, those hats are awesome. You're amazing and I feel for you because now you've set high expectations for all your kids. Good luck topping that!

PS. I think it's hilarious that all the kids started crying about getting their socks pulled off. Classic!

Thanks, guys, but I'm determined to "underachieve" from this point on myself. That party was too much and I don't plan on duplicating that mania again.

Aw, man! I was feeling really pretty good about myself after my latest post - thinking I'm kind of starting to get artistic and all that. But your post humbled me back down to reality. You are SO amazing, Tiff!!!

Tiff, you were never one to do something halfway! I'm impressed, even if the kids may not have been :)
I LOVE the Thing 1 and 2 costumes!! And those cupcakes are so cute!!

OK Tiff, I don't think you're going to underachieve, you'll be all psyched up again by the time the next holiday/birthday/inspiring infomercial rolls around. And just by the by, we played basically the same sock game at Sage's 7th birthday party (Olympics theme) and the result was very similar, even with 7-yr.-olds. Though it HAD been a success when we played it previously as a FHE activity with our own kids, so maybe try it again on a calmer day...

You are an animal! That party was amazing! Blast that radiator. I wish I could have seen it in real life. But, the photo essay was pretty amazing too. Happy birthday to Ellie! I hope she appreciates her amazing mom.